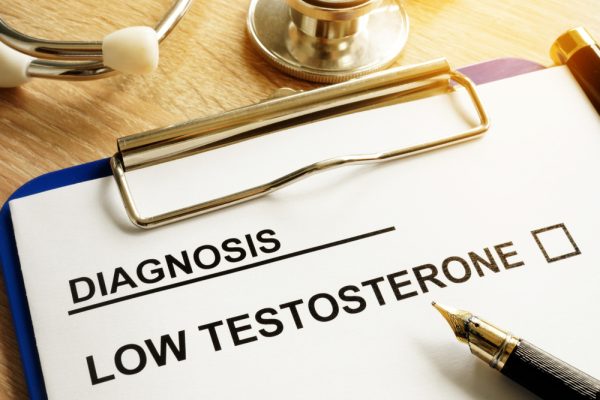 Testosterone has been called the hormone of desire… Although it’s in the androgen hormone class, considered to be “male” hormone, both men and women produce testosterone. The difference in amounts produced and the balance between estrogen and testosterone determine male or female body characteristics.

Many more articles have been written about overproduction of testosterone in women, as can occur in polycystic ovary syndrome for example, than for underproduction. But, lack of testosterone can also be a problem for women, and they are much less likely to be tested for this deficiency.

Symptoms of low testosterone in women

With low testosterone, women can feel fatigued and notice less interest, not only in sex, but in doing things they normally like to do. The term “lack of a sense of wellbeing” has also been used to describe how women with low testosterone can feel.

Physically, they may notice decreased muscle size and strength, and reduced hair growth on the body, particularly underarm, pubic and leg hair.

Vaginal dryness can also be caused by low testosterone, as well as by low estrogen. It is important to consider testosterone levels when estrogen supplementation does not correct vaginal dryness.

The association between low testosterone and low sex drive in women has been debated for years. However, a new systematic review of 36 randomized controlled trials, published in Lancet Diabetes Endocrinology 2019, found that supplementation is effective for postmenopausal women with low sexual desire causing distress.

Interestingly, taking other hormone supplements by mouth can result in symptoms of low testosterone. Here’s how it happens… In response to swallowed hormones, the liver produces increased amounts of a protein called sex hormone binding globulin (SHBG). SHBG binds to hormones making them unavailable to act in the body and, essentially, inactive. I would presume this is a mechanism developed through evolution to protect us from accidentally ingested hormones in our food.

However, SHBG binds testosterone 10 times more strongly than estrogen. This means that taking estrogen by mouth will result in increased SHBG that will scoop up and inactivate much of the testosterone the body is producing. Testosterone is still being produced but the woman may experience the symptoms of low testosterone because it is not free to leave the blood stream and act in the body. Regular blood tests for total testosterone would show a normal amount, but a test for “free testosterone” (testosterone not bound to proteins) would show the effective deficiency.

So, what can be done to correct testosterone deficiency?

I always recommend treating the cause if one is identified so, for women with a secondary deficiency caused by taking estrogen by mouth, a simple solution is to change the estrogen to a patch, cream or gel formulation, eliminating the first pass effect on the liver and reducing production of SHBG.

If this is not the cause, and total serum testosterone is found to be low, testosterone replacement can be considered. Swallowed testosterone is known to be hard on the liver, with increased liver cancer reported with some oral forms. As well, available tablets and capsules currently on the market are dosed for men and contain far more hormone than women need. I’ve seen prescriptions for women to take one man-sized 40mg capsule once or twice a week, but even this is more than women would produce, and would result in swings in testosterone blood levels that would be far too high on the days immediately after taking a dose.

Women produce less than 1mg of testosterone daily. It is easy to understand that a 40mg capsule would come with the recommendation to stop taking it if she developed facial hair growth or acne. Even the cream formulas that are available for men come in 25 and 50mg pouches or pumps with no accurate way to measure a lower amount.

However, testosterone cream can be accurately compounded by a pharmacist and loaded into needle-free syringes for accurate measurement. This is a preparation I made regularly over my 40-year career as a pharmacist. In later years, I routinely prepared the cream as 1% testosterone (10mg/ml) making it easier to calculate the desired dose and pre-loaded it into syringes to enable accurate measuring. A 1ml syringe would contain 10mg – generally enough for 10 days of testosterone replacement, although some women have reported results with doses as low as 0.15mg as maintenance!

Because hormones are stored in fatty tissues in the body, I generally recommend dosing testosterone at 2mg daily for the first week or two (since some of this would disappear into storage sites) then reducing to 1mg or less daily to avoid any chance of overdosing. One of the first signs of too much testosterone is often an outbreak of acne. I encourage women to identify the lowest dose that is effective for them. The “normal” amount can vary from person to person, and we need to remember that we are adding to the amount being produced, which can also vary from person to person. This is also true for all hormone supplementation.

You’ve likely noticed that the doses of oral hormones are much higher than that of transdermal hormones. With the transdermal route, the drug reaches the body before the liver has a chance to metabolize it. Hormone preparations are generally about 1/10th the dose when given through the skin, as compared to dosing by mouth. Transdermal hormone doses are much lower as the First Pass Effect is avoided, and liver production of SHBG is not increased.

Side effects of testosterone replacement include increased LDL-cholesterol and reduced total, HDL-C and triglycerides (with oral route only), and a dose-dependant risk of increased acne and hair growth. In my patients, I ensured the dose of transdermal testosterone was carefully measured by pre-loading it into 1-ml syringes, as described above, and provided detailed instructions for measurement and application. I received no complaints of acne or excess hair growth in women using a recommended dose of 2mg daily for up to 2 weeks then reducing to 1mg or less daily, applied to the inner thigh or pubic area. Note that continually applying transdermal testosterone to the same area of skin has been noted to encourage increased local hair growth. It is suggested to rotate the site of application within the groin area, or to apply to the pubic area where hair growth is normal.

And if you treat men?

Men can also become deficient in testosterone. Some refer to this as “andropause”… others have jokingly called it “grumpy old man syndrome” since deficiency most commonly occurs later in life, the man may be stooped and thin due to decreased muscle and possibly the onset of osteoporosis, and his mood may have become less than cheery.

Testosterone replacement for men is commercially available in capsules, injections and creams and, although somewhat less convenient, the creams or injections would be preferred to reduce the negative effects of hormone on the liver. As injections are generally given every 2 to 4 weeks, they have the disadvantage of producing a higher blood level of hormone immediately after the injection and a lower level before the next injection is scheduled. A blood test along with improved mood and muscle strength would confirm that testosterone is needed and that the dosing is correct.

So, if your patient describes symptoms of low testosterone, particularly both physical and psychological symptoms, discuss the possibility of low-dose testosterone replacement with her. If you are interested in more information on supplementation in women, I would recommend “The Hormone of Desire” by Dr. Susan Rako as an excellent source of detailed information on testosterone deficiency in women. I also devoted a chapter to this hormone imbalance in my book, “Can I Speak to the Hormone Lady? Managing Menopause and Hormone Imbalances”.