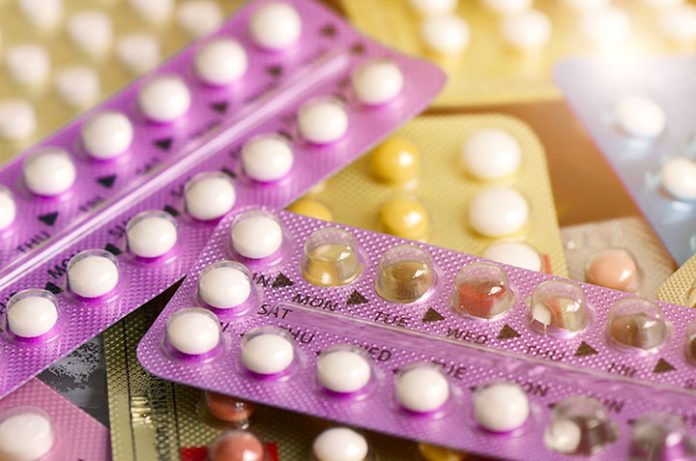 Combination oral contraceptives (COCs) continue to be the most popular reversible contraceptive method in the United States.1 In the 60 years since first introduced on the market, we have seen an ongoing evolution. The first COCs available contained 50 μg or more of estrogen.2 These first formulations had a theoretical effectiveness of practically 100%.3 They also had high rates of cardiovascular complications and undesirable side effects.2 Thus, the changes in COC formulations over time have not been made to increase effectiveness but rather to increase safety and decrease side effects. The effectiveness of today’s low-dose COCs has been maintained through the combined action of both the estrogen and progestin and by new administration schedules.3

The primary mechanism of action of COCs is prevention of ovulation. Progestins inhibit ovulation by blocking gonadotropin-releasing hormone and suppressing the luteinizing hormone surge, preventing the release of a dominant follicle. The estrogen component of COCs potentiates the action of the progestin by suppressing the follicle-stimulating surge, necessary for recruitment of the dominant follicle. Estrogen stabilizes the endometrial lining, reducing unscheduled bleeding and allowing for cycle control.1

Progestin development has been ongoing in an attempt to improve on possible androgen-related side effects and to solve issues of unscheduled bleeding that are more common with lower estrogen doses.1,4 Controversy exists over the potential that progestin formulations may differentially modulate the risk for venous thromboembolism (VTE) associated with the use of estrogen. In this article, we review the progestin types in COCs available in the US, the controversy regarding increased VTE risk with different progestin formulations, status of unscheduled bleeding with low-dose COCs, and current evidence about any impact of progestin type when COCs are used to treat acne. Being knowledgeable about the pharmacodynamics of progestins may help clinicians and patients as they make shared decisions about initial and ongoing COC choices.

Most progestins in COCs are derived from testosterone with the exception of the most recently introduced drospirenone. The different progestins exert variable androgenic, estrogenic, and antiestrogenic activity in COCs.1 Progestin development over time has focused on decreasing androgenic activity.5

Traditionally, a generation-based classification system has been used to describe progestin types used in COCs in the US. This classification is based on when progestins were commercially introduced and not necessarily on physiologic differences.5 Thus, the utility of this classification in making COC choices is likely over emphasized. For the sake of being able to point out some of the uniqueness of different progestin formulations, we include a review by generation.

The second-generation progestins include levonorgestrel and norgestrel arriving on the market in combination with lower EE levels. These progestins have higher progestational and androgenic effects than earlier progestins and strong antiestrogeneffects.1 Levonorgestrel is the most widely prescribed contraceptive progestin globally. It has been used in most of the studies comparing risk of VTE among the different progestins and is associated with the lowest risk.1 The US Food and Drug Administration (FDA)-approved progestin-only emergency contraception pills contain levonorgestrel.

Attempts to reduce the androgenic activity of second-generation progestins resulted in the development of third-generation progestins that include norgestimate and desogestrel. The decrease in androgenic effects of these progestins comes from an increased stimulation of estrogen receptors.1 Potential noncontraceptive benefits include treatment of androgenic conditions such as acne. One of the COCs that has received FDA approval for acne treatment contains norgestimate. Controversy exists over the hypothetical concern for increased VTE risk with desogestrel but not with norgestimate.

Fourth-generation drospirenone is the only progestin derived from 17a-spironolactone. It has a biochemical profile similar to endogenous progesterone with heightened antiandrogenic properties.1 This progestin’s antimineralocorticoid activity balances the aldosterone-stimulating effects of estrogen, which could possibly reduce water retention and associated weight gain.1 There is a potential for hyperkalemia to occur in individuals on daily, long-term treatment with medications that may increase potassium levels. These individuals should have a serum potassium level checked during the first month of use.6 Individuals with renal, hepatic, or adrenal disease should not take COCs containing drospirerone.6 Drospirenone-containing COCs have been FDA-approved for the treatment of acne as well as for the treatment of symptoms of premenstrual dysphoric disorder. Controversy exists about a potentially increased risk for VTE.1 The FDA has recently approved a progestin-only pill containing drospirenone.

Venous thromboembolism is a serious although uncommon adverse event associated with the use of COCs. The known dose-dependent effects of estrogen on coagulation include an increased hepatic production of elements that promote clot formation (factors I, II, VII, VIII, X) and decreased production of elements that promote clot lysis (tissue plasminogen activator, antiplasmin).7 Reducing the estrogen dose has decreased VTE risks without loss of efficacy. Today, the relative risk of VTE is estimated to be about 2-fold higher in low-dose (< 50 μg) COC users than nonusers.7 To put this in perspective, the estimated incidence of VTE overall in healthy, nonpregnant women who are non-COC users is about 5 to 10 per 10,000-woman years.7

Progestins alone have virtually no impact on the clotting system. It has been speculated that when combined with estrogen, certain progestins can differentially increase the risk for blood clot formation.7 Biologically plausible mechanisms for such differences among the progestins have not yet been proved.5 On the basis of available evidence, it remains unclear whether the type of progestin in a COC significantly affects risk of VTE. A large retrospective cohort study using four national Danish registries did find an increased relative risk of VTE with COCs containing desogestrel and drospirenone when compared with levonorgestrel-containing COCs. In this study, it was noted that the risk of VTE regardless of progestin type decreased with duration of use and decreasing estrogen dose.8 Two large prospective studies, the European Active Surveillance Study and the International Surveillance Study of Women Taking Oral Contraceptives, found no difference between VTE risk among users of COCs containing drospirenone versus levonorgestrel.9,10

Acne is one of the most common skin conditions requiring medical treatment, with women being more affected than men. The pathogenesis of acne is a complex interplay of factors, including an increased rate of sebum production, which is predominantly controlled by androgenic sex hormones.11 COCs are frequently prescribed for women because of their dual functions of acne treatment and contraception.

Acne is believed to be improved by COCs through the suppression of testosterone levels and an increase in sex hormone binding globulin (SHBG), resulting in an overall reduction in the serum concentration of free (biologically active) testosterone. The estrogen component of COCs is primarily responsible for this suppression of testosterone and increase in SHBG. Although progestin types differ in androgen-related activity, likely the estrogen effects are not changed. A systematic review of studies of COCs and acne treatment did not find any important or consistent differences when pills with various progestins were compared. All of the COCs studied in trials with placebos worked well to reduce facial acne.11

Currently available COCs offer a variety of choices with a progestin component. All of them in combination with lower doses of estrogen provide highly effective contraception with impeccable safety records. It is plausible that individual differences in progestin metabolism could lead to differences in experiencing side effects and also noncontraceptive benefits. Such individual differences cannot be determined in advance, but clinicians can participate in a discussion with patients about potential risks and benefits of existing and new products for informed and shared decision making.

Many factors come into play when making a COC selection. Among them are the patient’s clinical picture, preferences which may include noncontraceptive benefits, past experiences with hormonal contraception, availability, and cost. Adherence and continuation are enhanced by providing anticipatory guidance about common side effects to include unscheduled bleeding. Patients who are confident in using their chosen method and who know that the clinician is available to answer questions and to adjust pill formulations are the most likely to be satisfied with their contraception.

Shelagh Larson is a WHNP with Acclaim Physician Group in Fort Worth, Texas. Beth Kelsey is the Director of Publications for the National Association of Nurse Practitioners in Women’s Health in Washington, DC, and the editor in chief of this journal. The authors have no actual or potential conflicts of interest in relation to the contents of this article.