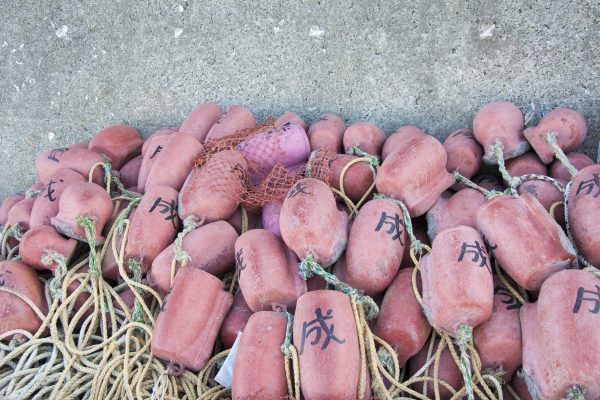 More than 90% of cases of broken heart syndrome, clinically referred to as Takotsubo syndrome (TS), affect postmenopausal women.  Some research suggests that up to 5% of women diagnosed with a heart attack may actually have TS.  The risk of developing the condition increases 5 times in women after the age of 55.

Now, in the only study with the largest nationally representative sample thought to investigate the association of mental health disorders (MHD) with TS in women, researchers concluded that MHD were associated with an increased risk for TS.

The study, released in early April, was conducted between 2007 and 2015.  In it, researchers utilized information from the US National Inpatient Sample (NIS) public database to compile the discharge notes of ~10.9 million women aged 60 years and older who had been hospitalized with severe cardiac symptoms.

For purposes of the study, MHD were defined by conditions surrounding adjustment disorders, anxiety disorders, and mood disorders.  The researchers assessed 10,884,613 nonelective hospital admissions to identify MHD in patients with either a primary (n=4,749) or secondary (n=6,702) diagnosis of TS.  International classification of diseases (ICD) codes and classification software (CCS) codes were used to diagnose TS and MHD, respectively.  Two regression models showed the influence that sociodemographic, hospital-level, and behavioral/lifestyle factors had on the association between MHD and TS.

Researchers determined that MHD were associated with an increased risk for TS (odds ratio, 1.25; 95% CI, 1.18-1.32).  The CI increased for patients with a secondary diagnosis of TS (95% CI, 1.30-1.50).  Although stipulating that the association between TS and MHD requires further investigation, the researchers noted that the risk for TS increased in patients with adjustment and mood disorders, such as generalized anxiety disorder, and decreased among those with a history of attempted suicide and self-harm injuries and those with personality disorders, including schizophrenia.

Interestingly, the authors note, their data were inconclusive as to whether MHD instigate or are a consequence of a TS diagnosis.  “The prevalence of TS in the United States increased by about fourfold from 2007 to 2015 among older women, with the prevalence higher among patients with diagnosis of MHD,” the study authors wrote.

“Overall, this study found a positive association between MHD and TS.  This association, which was not homogeneous across the entire spectrum of MHD, was observed to increase with the number of MHD diagnosed.  Further studies are needed to elucidate the underlying mechanisms linking MHD with TS,” they concluded.

Many names—and the name explained

The occurrence of TS has been rising among American adults over the past 15 years.  The increase in its prevalence over time may be due to several related factors, including increased recognition and improved documentation of Takotsubo syndrome diagnosis, advances in diagnostic techniques for TS, and an increase in the aging population — especially among women.

TS can mimic acute coronary syndrome and patients experiencing it may head for the emergency department (ED) because they are worried that they are having an acute myocardial infarction.  However, although TS can present as acute myocardial infarction, it is not clinically distinguishable in the ED.  According to the Mayo Clinic, TS affects just part of the heart, temporarily disrupting the heart’s usual pumping function.  The rest of the heart continues to work properly or may even contract more forcefully.

First identified by researchers in Japan in 1990 and in the United States in 1998, TS is a sudden, stress-induced heart condition which can develop at any age and typically affects more women than men.  Although it is not a heart attack, it can cause similar symptoms such as chest pain or shortness of breath. 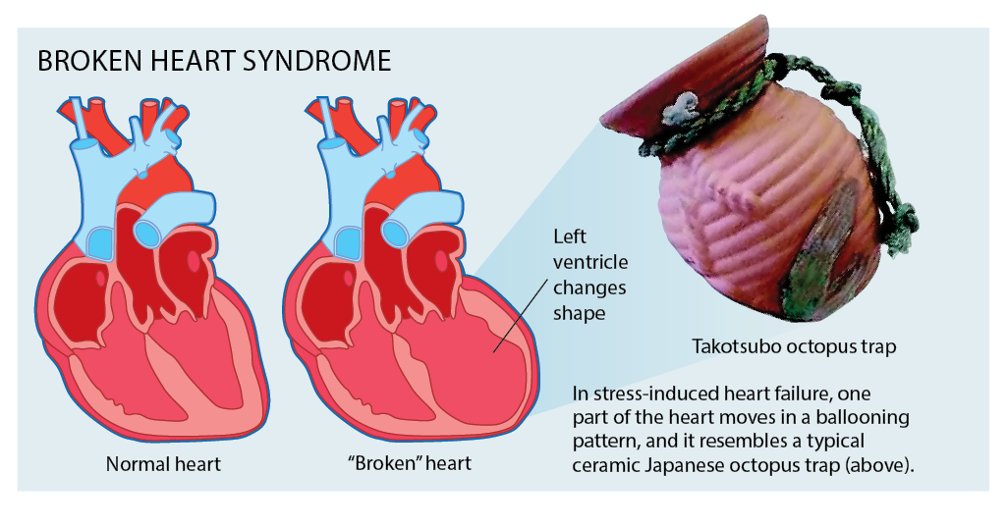 The syndrome takes its name from the Japanese words “tako” (octopus) and “tsubo” (pot), thus takotsubo, a pot used by Japanese fishermen to trap octopuses.  The name describes the changed shape the left ventricle of the heart takes, developing a narrow neck and a round bottom and making it look similar to the traditional octopus trap.

In the International Takotsubo Registry study (a consortium of multiple centers across Europe and America comprised of 1,750 patients), the most common symptoms of TS are chest pain, dyspnea, and syncope.  Some patients may present with symptoms and signs of heart failure, tachyarrhythmias, bradyarrhythmias, sudden cardiac arrest, or severe mitral regurgitation.  There may also be symptoms and signs of transient ischemic attack or stroke-like presentation.  Approximately 10% of patients with stress cardiomyopathy develop cardiogenic shock.  According to the National Institutes of Health (NIH), TS can be fatal.

From an age standpoint, TS is most common among postmenopausal females.  The International Takotsubo Registry study showed that approximately 88.9% of affected patients were females, with a mean age of 66.4 years.  Some data suggest that Mediterranean and Asian females are particularly susceptible to the condition.

While the vast majority of TS patients are post-menopausal women, the exact reason for this is not fully understood.   Ilan Wittstein, MD, program director of the Johns Hopkins Advanced Heart Failure Fellowship, states that it is hyptohesized that the female hormone estrogen helps to protect the heart from the harmful effects of adrenaline and that women become particularly vulnerable to the effects of sudden stress as they grow older and their estrogen levels decline.

Triggers and risks for TS

The risk factors the NIH lists for the development of TS are wide ranging and include:

Mayo Clinic reports that, rarely, use of certain drugs may lead to TS, including:

Clinical suspicion, a Dx of exclusion

The NIH advises that the diagnosis of TS should be suspected in adults—especially postmenopausal women—who present with a suspected acute coronary, particularly when the clinical manifestations and electrocardiographic abnormalities are out of proportion to the degree of elevation in cardiac biomarkers.  Further, the organization emphasizes that clinicians bear in mind that TS is a diagnosis of exclusion which can solely be made following coronary angiography due to its indistinguishable features from acute coronary disease.

It is not possible to self-diagnose TS or to distinguish it from a heart attack based on the symptoms alone, states the NIH.  However, there are important distinctions.  Here are 4 key TS hallmarks:

Heart attack recovery can be long and intense, and a patient may still have serious underlying heart disease.  In comparison, a 2020 paper estimates that 96% of people with TS fully recover.

Patients who experience a heart attack typically have underlying heart disease, which increases their risk of having another heart attack.  By contrast, TS has a relatively low recurrence rate of 2% to 4% per year.

TS is a temporary condition that usually resolves on its own, although some patients may experience long-term heart complications.  A heart attack, in contrast, happens due to underlying heart disease.  An untreated heart attack can be fatal.

Wittstein explains that when one experiences a stressful event, the body produces hormones and proteins such as adrenaline and noradrenaline which are meant to help cope with the stress.  The heart muscle can be overwhelmed by a massive amount of adrenaline that is suddenly produced in response to that stress.  That excess adrenaline, in turn, can cause narrowing of the small arteries that supply the heart with blood, causing a temporary decrease in blood flow to the heart.

Alternatively, the adrenaline may bind to the heart cells directly, causing large amounts of calcium to enter the cells.  This large intake of calcium can prevent the heart cells from beating properly.  It appears that adrenaline’s effects on the heart during broken heart syndrome are temporary, and completely reversible, Wittstein notes.  “The heart typically recovers fully within days or weeks,” he continues.

Studies suggest that a patient who has experienced broken heart syndrome will most likely not have more episodes, according to Wittstein.  “The majority of patients don’t experience a second episode and up to only 5% have a recurrent episode.”