Menopause affects many areas of a woman’s body, including vulvar and vaginal tissue. Most women present with some degree of atrophic vulvovaginal tissue changes in the years following menopause, and up to nearly half of all menopausal women are symptomatic. In 2014, a name change was proposed to include the entire genitourinary tract, not just the vulva and vagina, with regard to all the changes that occur in this area of the body as a result of menopause: genitourinary syndrome of menopause (GSM). Women’s healthcare providers have a variety of FDA-approved options to treat women presenting with symptomatic GSM, including local hormonal therapies, a nonhormonal oral tablet, and an intra­vaginal CO2 laser device.

For years, the terms vulvovaginal atrophy (VVA) and atrophic vaginitis have been used to describe menopause-related changes to the vulvovaginal tissue. These terms have been used despite the negative connotation of the word atrophy and the specificity to vulvar and vaginal tissue. In May 2013, two organizations, the International Society for the Study of Wom­en’s Sexual Health (ISSWSH) and The North American Menopause Society (NAMS), came together to develop more appropriate nomenclature through a terminology consensus conference. Late last year, the more appropriate and all-encompassing term genitourinary syndrome of menopause was adopted to replace the terms vulvovaginal atrophy and atro­phic vaginitis.1 The term genitourinary syndrome of menopause, or GSM, acknowledges the full spectrum of menopause-related atrophic changes that occur within the entire genitourinary tract.1

The terms VVA, atrophic vaginitis, and GSM are used interchangeably throughout this column. Readers will continue to see the terms vulvovaginal atrophy and atrophic vaginitis in the literature for some time because these terms were used in research completed before adoption of the term GSM.

During perimenopause and the years following, the drastic decline in circulating sex hormones, including estrogen, progesterone, and testosterone, results in changes to multiple areas of the body. Some of the more widely recognized symptoms of menopause, including hot flashes, weight gain, and mood changes, diminish over time as the body acclimates to functioning without cyclical changes in hormone levels. By contrast, the effects of the ongoing hypoestrogenic state of menopause on genitourinary tissue intensify, at least in women who do not receive any type of treatment for them.2 Objective findings related to this hypoestrogenic state include vaginal tissue thinning, diminished elasticity, and increased friability, which can result in petechiae, fissuring, erosions, and, in severe cases, stenosis.3 Symptoms related to these physical changes—that is, the symptoms of GSM—include vulvovaginal dryness, itching and burning, painful intercourse, dysuria, urinary urgency and frequency, and recurrent urinary tract infections.1

The average age of menopause in the United States is 51 years. Because life expectancy in this country continues to climb,4 the population of menopausal women is steadily rising, and women may expect to live up to 40% of their lives in a postmenopausal state.5 Of the millions of women who spend years or decades in a perimenopausal and then a postmenopausal state, nearly half will experience bothersome symptoms of GSM/VVA.6 Given these numbers, GSM is an area that warrants major interest in the healthcare community.

Despite the widespread prevalence of GSM, healthcare providers (HCPs) must keep in mind that many women are not comfortable discussing symptoms of GSM with their HCP, and vice versa. According to the Women’s Voices in the Menopause international survey, nearly 80% of online respondents felt that women were not comfortable discussing vaginal atrophy.7 The Real Women’s Views of Treatment Options for Menopausal Vaginal Changes (REVIVE) survey reported that only 56% of women had ever discussed their VVA symptoms with an HCP.8 In the VIVA (Vaginal Health: Insights, Views & Attitudes) survey, 80% of respondents stated that vaginal discomfort adversely affected their lives, and 75% of respondents reported adverse consequences on their sex lives.9

In the recent past, nonhormonal lubricants and local hormonal therapies were the only treatment options for women with GSM. To date, six FDA-approved therapies for VVA/GSM are available (Box). Intravaginal CO2 laser therapy, approved in late 2014, offers a unique, nonpharmacologic option for women, including breast cancer survivors, who are not candidates for hormonal treatment. 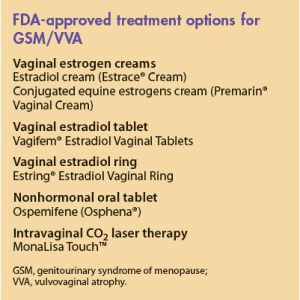 Regardless of the treatment chosen, HCPs caring for women must encourage open communication regarding symptoms of GSM with patients who may be otherwise unlikely to initiate conversation on such sensitive matters. With healthcare advances, many treatment options are available for all degrees of GSM severity and all circumstances.

Brooke M. Faught is a nurse practitioner and the Clin­ical Director of the Women’s Institute for Sexual Health (WISH), A Division of Urology Associates, in Nashville, Tennessee. The author states that she serves on the speakers’ bureau for Actavis Pharma, Inc., and Shionogi Inc.