Implementation of the HSDD process of care into clinical practice 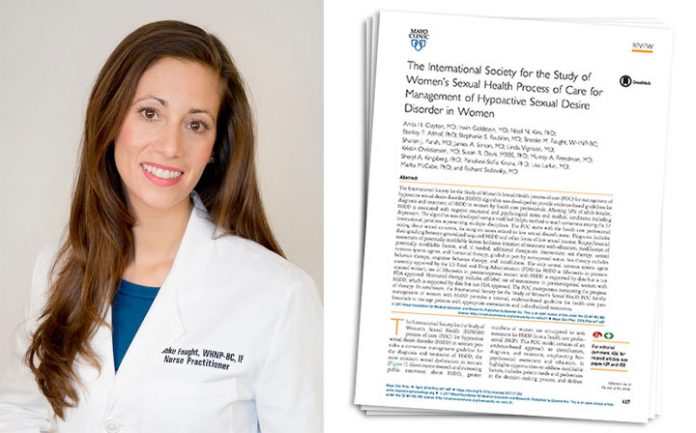 Distressing low sexual desire is the most common sexual complaint among women in the United States. Despite the prevalence of this condition and others like it, many healthcare providers ﬁnd the diagnosis and treatment of female sexual disorders elusive. In late 2016, a team of sexual health experts from the International Society for the Study of Women’s Sexual Health met to develop a process of care (POC) to streamline the management of women with hypoactive sexual desire disorder (HSDD). In April 2018, Mayo Clinic Proceedings published the HSDD POC, which is summarized here. 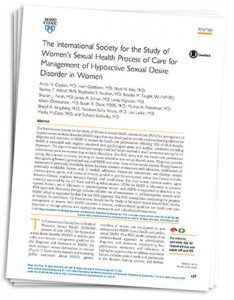 Hypoactive sexual desire disorder is defined by the Diagnostic and Statistical Manual of Mental Disorders (DSM) as persistently or recurrently deficient (or absent) sexual fantasies and desire for sexual activity, which causes marked distress or interpersonal diﬃculty.3 HSDD can be lifelong or acquired, and generalized or situational.4 Healthcare providers (HCPs) need to accurately identify the type of HSDD an individual is experiencing in order to appropriately manage her care.

Journal articles first published content on HSDD in the 1970s.1,6 As with past beliefs about depression, HSDD is often incorrectly perceived as a fabricated condition, with no biochemical basis, that is intended for pharmaceutical gain. Current understanding of HSDD is that it is a real condition with various potential contributing causes and profound biopsychosocial ramifications.7-10

Sexual response relies on a balance between excitatory and inhibitory factors.11,12 Known excitatory factors in sexual response include the biochemical compounds dopamine, norepinephrine, oxytocin, and melanocortin, and human emotional connectors such as intimacy, romance, and shared values.11,12 Inhibitory factors include the biochemical compounds serotonin, endocannabinoids, endogenous opioids, and prolactin, and human emotional disconnectors such as relationship conflict, negative stress, and negative beliefs about sex.11,12 In many cases, a combination of inhibitory factors contributes to HSDD.

The International Society for the Study of Women’s Sexual Health process of care (POC) for HSDD provides a simplified method for evaluating, diagnosing, and treating female patients with distressing low sexual desire (Figure).13  The HSDD POC encourages use of a biopsychosocial approach to fully understand the unique experiences of individual women with HSDD.4,7,13 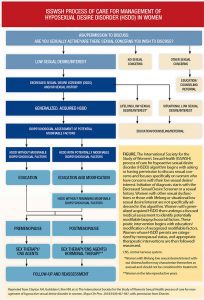 As with all interactions between patient and HCP, both participants must feel safe and comfortable, especially when discussing sensitive issues such as sexual intimacy. The best way for an HCP to initiate a conversation about sex in a patient encounter is to ask the patient if she is sexually active.14 Next, the HCP can pose a more direct question that allows the patient to tell her story. For example, the HCP can ask her whether she has any concerns about her sexual health that she wants to discuss at the visit. It is helpful to normalize a conversation about sexual health by telling the patient that many women experience challenges in terms of their sexual functioning.

The Decreased Sexual Desire Screener (DSDS), a validated tool, helps rule out contributing causes to low sexual desire and expedite the proper diagnosis of generalized acquired HSDD.15-16 1The DSDS is designed for patients to self-administer and can be completed in a few minutes.15

If an HCP has an adequate comfort level and has experience in sexual medicine, then the next step is to obtain the patient’s sexual health history. Of importance, the HCP also needs to be unbiasedduring a sexual health interview. The HCP should never make any assumptions—based on a patient’s age, race, religious beliefs, appearance, partnered/marital status, or socioeconomic status—about her sexual orientation, monogamy status, type or frequency of sexual practices, or propensity for masturbatory behavior. If an HCP is not comfortable discussing or managing problems related to sexual dysfunction, then the HCP can validate the patient’s concerns and offer referral to a qualified practitioner.

When I interview patients about their sexual health, I start by reinforcing the confidentiality of our conversation. Next, I make an open-ended statement/request: I understand you have some concerns related to low sex drive. Tell me your story. This statement communicates to the patient that I am comfortable with the topic and want to know her entire experience related to low sexual desire. If time is limited, I say to the patient: I find your concerns valid and worthy of a discussion. Let’s schedule another appointment to focus on these concerns.

As part of the biopsychosocial assessment in the HSDD POC, HCPs should perform a physical examination and order laboratory testing when indicated.13,17 The physical exam, including a full vulvovaginal exam, provides a window into the hormonal status of the woman, among other useful information. In addition, the vulvovaginal exam facilitates an opportunity for the HCP to educate the patient about the anatomic structures of her genitals and sexual health physiology. When appropriate, use of a mirror to identify genital landmarks during an exam can reassure a woman of her urogenital health, as well as empower her to explore erogenous areas during future sex play. I dub this educational opportunity Vagina 101. Many of my patients find this “class” incredibly helpful because they feel uncomfortable or ill equipped to explore their genital anatomy on their own.

Menopausal status of the woman must be determined in order to properly follow the HSDD POC. In a woman of unknown menopausal status, the Stages of Reproductive Aging Workshop (STRAW + 10) indicates typical changes associated with menopause.19  Once a woman is identified as being pre- or postmenopausal, an HCP may choose the appropriate treatment pathway in the HSDD POC.19

After a diagnosis of HSDD has been made, the patient should be offered education about the condition and management of potentially modifiable factors.13 In cases where HSDD persists despite first- and second-line therapies, pharmaceutical intervention and sex therapy may be considered.13 Treatment of HSDD in premenopausal women should include consideration of sex therapy with a certified sex therapist and/or use of central nervous system-acting agents.13 In postmenopausal women with HSDD, use of hormonal therapy should be considered.13

Another medication, bremelanotide (BMT), remains under development as an on-demand, injectable, peptide melanocortin receptor agonist.22 Palatin Technologies plans to seek FDA approval for BMT near the end of 2018 for the indication of HSDD in premenopausal women. Results of phase III clinical trials showed statistically significant improvements in sexual desire and reduced distress with this agent.22 In addition, BMT is associated with improvements in sexual arousal, vaginal lubrication, orgasm, and satisfaction—as evidenced by corresponding Female Sexual Function Index domain scores.22,23 Although not FDA approved for use specifically in HSDD, testosterone products and oral bupropion have been used off-label by sexual medicine experts to treat distressing low sexual desire in women.17,24,25

Referral to a certified sex therapist is another highly useful option for treating women with HSDD.13 Sex therapists use various interventions, including behavior therapy, cognitive behavioral therapy, and mindfulness therapy, to treat HSDD.13 Local sex therapists and sexuality educators can be identified on the Society for Sex Therapy & Research website and the American Association of Sexuality Educators Counselors and Therapists website.

Hypoactive sexual desire disorder is the most common sexual dysfunction among U.S. women. Nevertheless, many women with HSDD do not seek or receive appropriate care for their symptoms. The HSDD POC helps guide HCPs in utilizing a biopsychosocial approach to screen, diagnose, and treat women with distressing low sexual desire.13

Brooke M. Faught is a nurse practitioner and the Clinical Director of the Women’s Institute for Sexual Health (WISH), A Division of Urology Associates, in Nashville, Tennessee. She is a Fellow of the International Society for the Study of Women’s Sexual Health (ISSWSH). The author states that she serves as a speaker and an advisory board member for AMAG and as an advisory board member for Symbiomix, Duchesnay, and AMAG.

PrEP for women: An update for healthcare providers

PrEP use among women has the potential to reduce new HIV infections by 61% (with ≥ 75% adherence), yet less than 10% of men and women who are “behaviorally indicated for PrEP” are utilizing this important prevention tool.
Read more
Addiction

Mental illness stigma: Strategies to address a barrier to care

Reproductive-age women with prediabetes or type 2 diabetes can benefit from education that allows them to develop a reproductive life plan that will optimize future pregnancy outcomes.
Read more

© 2020 HealthCom Media All rights reserved. No part of this website or publication may be reproduced, stored, or transmitted in any form or by any means, electronic or mechanical, including photocopy, recording, or any information storage and retrieval system, without permission in writing from the copyright holder

Sign up today for our Bi-Weekly email newsletter from the publisher’s of Women’s Healthcare. You’ll get breaking news features, exclusive investigative stories, short news summaries, and more — delivered to your inbox.