Female sexual dysfunction: Why is it so difficult to treat?

Many healthcare providers avoid addressing and treating sexual problems in women for a multitude of reasons, including the paucity of FDA-approved medications for female sexual dysfunction (FSD), concern about the additional time required during the patient visit, and confusion over billing and coding, leading to challenges regarding reimbursement. In this column, I describe the common barriers and misconceptions that impede successful evaluation and treatment of FSD.

Over recent years, multiple studies have demonstrated the high prevalence of sexual complaints in women. In fact, more women than men report problems with sexual functioning, including problems related to libido, arousal, orgasm, and pain. In the National Health and Social Life Survey, 43% of women reported one or more sexual problems, compared with 31% of men.1 Nearly 10 years later, the PRESIDE study demonstrated a 44% prevalence of female sexual dysfunction (FSD) in the United States.2 Despite these compelling statistics, research regarding treatments for sexual dysfunction and marketing for products designed to improve sexual function have been primarily geared toward men, not women. Although the focus may finally be shifting to women, why is FSD still so difficult to treat?

In 1998, the FDA approved sildenafil (Viagra®) as the first medication for the treatment of erectile dysfunction (ED) in men, initiating a new kind of sexual revolution. Men with ED who had previously been rendered virtually abstinent were now able to resume satisfying sexual activity. Since that time, 27 medications have been approved by the FDA for the direct or indirect enhancement of sexual functioning in men. Until 2 months ago, the total number of FDA-approved medications for the treatment of low sexual desire in women was zero. But on August 18, 2015, the FDA made history by approving flibanserin (Addyi™), the first-ever medication for the treatment of hypoactive sexual desire disorder in women.3

#2: Too time consuming to address

One of the biggest complaints that I hear from healthcare providers (HCPs) regarding addressing their female patients’ sexual concerns is that it takes too much time in an already busy clinic setting. I recommend the use of any of the following validated questionnaires, which can facilitate discussions about this sensitive and complicated topic.

#3: Not a profitable specialty

Although billing based on time spent face-to-face with a patient is not typically a lucrative method for running a practice, HCPs do have ways to enhance reimbursement when treating female patients with sexual complaints. For instance, offering services such as colposcopy, vulvovaginal biopsy, biothesiometry, perineometry, and trigger-point injections can provide a major increase in revenue when utilizing procedural modifiers. Even minor tests such as urinalysis, wet preps, and vaginal pH analysis can add profit to a patient encounter. When applicable, providing urogynecologic services such as urodynamics, tibial nerve stimulation and pessary placement/maintenance can further boost clinic revenue.

Although nearly half of all surveyed women in the two aforementioned studies reported sexual complaints,1,2 only 12% reported experiencing distress related to their sexual problems.2 In order for a woman to meet criteria for an FSD diagnosis, she needs to be bothered by her condition. If she does not experience such distress, then treatment is unnecessary and unlikely to prove beneficial. HCPs need not create a diagnosis where none exists. At the same time, FSD is a true entity that deserves attention when warranted. 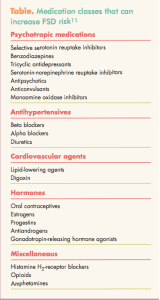 In 2010, the Journal of Sexual Medicine published proceedings from the International Consultation in Sexual Medicine, which included this quote: Current sexual health education for undergraduate and practicing physicians is inadequate to meet the advancing science and technology and increasing patient demand for high-quality sexual health care.12 That being said, many academic programs for prospective physicians, nurse practitioners, and physician assistants are beginning to incorporate more sexual health training into their curricula, which will arm HCPs with the knowledge and confidence needed
to manage patients’ sexual problems or refer them to another provider when appropriate.

In a study presented in 2010, Parish et al13 evaluated 75 videotaped patient–provider interactions regarding distressing low desire (DLD). HCPs underestimated the prevalence of distress in 82% of women who described themselves as very distressed with respect to their low desire. In this same study, 69% of women minimized their distress during the encounter with the provider but then acknowledged their distress after the visit. Although the impact of DLD was not addressed in any of the 75 interactions, after the visit, 95% of the patients reported that DLD affected their relationship and 98% reported that it affected their partners.

Considering the high prevalence of FSD, and the likelihood that it is distressing to at least a sizable minority of women who have it, HCPs must aim to identify it and treat it—despite the barriers that still exist. Addressing patients’ concerns in a holistic manner, establishing rapport, and providing a nonjudgmental environment for discussion about sensitive topics is the best method to facilitate success in this patient population.

Brooke M. Faught is a nurse practitioner and the Clinical Director of the Women’s Institute for Sexual Health (WISH), A Division of Urology Associates, in Nashville, Tennessee. The author states that she does not have a financial interest in or other relationship with any commercial product named in this article.