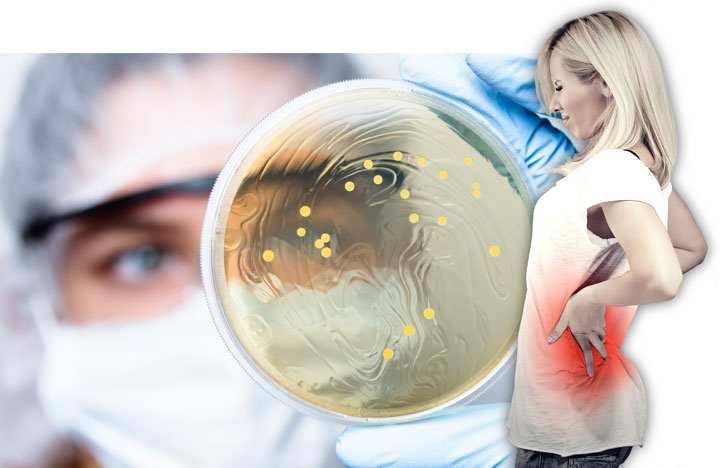 Recurrent bacterial urinary tract infections (UTIs) are common in women; symptoms vary in severity from minor to life threatening. UTIs not only affect quality of life but also have a vast financial impact, accounting for more than $2.6 billion in healthcare costs annually in the United States.1 Eells et al2 reported that 20%-30% of women presenting to clinic with a UTI go on to experience a second UTI within 6 months. UTIs lead to more than 470,000 hospitalizations each year.2 More than 50% of U.S. women experience a UTI at least once in their lifetime.1-3  Risk factors for UTI include elevated residuals due to pelvic floor dysfunction, decreased fluid intake, low estrogen levels, sexual intercourse, and anatomic abnormalities.4 Osamwonyi and Foley4 reported an average yearly recurrence rate of 2.6 infections after initial infection.

By definition, recurrentUTIs, diagnosed by urine culture, are two episodes in a 6-month period or three episodes in 1 year.5-11 Re-infection is most often due to a different pathogen after initial successful treatment and should not be confused  with relapse.12 Typical symptoms of UTI, recurrent or otherwise, include dysuria, increased urinary frequency, urinary urgency, and hematuria.13 Both antimicrobial and non-antimicrobial agents, as well as behavioral therapies, have been used for suppressive therapy in patients with recurrent UTIs. In particular, suppressive therapeutic interventions include increased fluid intake; low-dose antibiotics; D-mannose; cranberry products, including juice, extract, and tablets; probiotics; intravesical treatments; vaccines; and vaginal estrogen.4,12,13 The American Urological Association recommends low-dose antibiotics as the first-line approach for recurrent UTI prophylaxis.14 By contrast, the European Association of Urology guidelines for prophylaxis suggest starting with behavioral changes, followed by non-antimicrobial therapy, and, finally, antimicrobials.13 Non-antimicrobial treatments are gaining popularity in this country as healthcare providers (HCPs) and women alike seek out alternatives to antibiotics.

A comprehensive search of three databases was performed through a university library. Databases searched included PubMed, Embase, and Scopus. Key terms used to locate applicable information were recurrent urinary tract infection and prevention. The initial search yielded a total of 1,903 results: 683 articles from Embase, 329 articles from PubMed, and 891 from Scopus.

Following the initial search, inclusion criteria limited articles to those (1) published in the past 5 years, (2) pertaining to females only, and (3) written in English. All articles were obtained in full text from the initial search. After application of these criteria, 63 Embase articles, 31 PubMed articles, and 95 Scopus articles remained. Systematic reviews, meta-analyses, literature reviews, and ongoing clinical trials were excluded. Articles with a specific focus on postsurgical patients, pediatric patients, kidney disease, pelvic floor prolapse, and pregnant women were also excluded, along with duplicate articles and those not applicable to the subject of this literature review. Upon application of exclusion criteria, eight articles remained. These articles were reviewed judiciously to ensure relevance to prevention of recurrent UTIs in women and to determine level of evidence. The eight studies described in these articles met criteria for Level II evidence based on the Fineout-Overholt paradigm.15 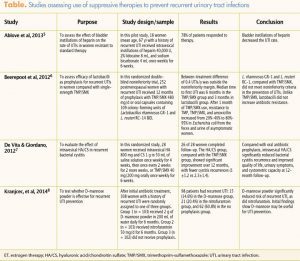 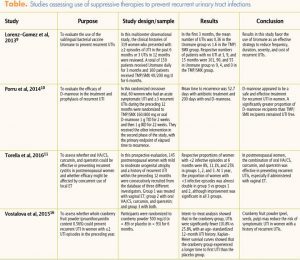 The literature review yielded three themes: (1) long-term suppressive therapy with low-dose antibiotics was not nearly as effective as perceived to be; (2) efficacy of nonantibiotic suppressive treatment options for recurrent UTIs varied; and (3) providers sought out non-antibiotic therapies for suppression for a multitude of reasons.

Efficacy of long-term use of lowdose antibiotics

For years, long-term use of low-dose antibiotics has been the suppressive approach of choice for recurrent UTIs. Because of increased drug resistance, these antibiotics are not as effective as they once were, and women are experiencing recurrences.5,7,9,10 Beerepoot et al6 conducted a randomized, double-blind, noninferiority trial of trimethoprim-sulfamethoxazole (TMP/SMX) versus lactobacilli in preventing recurrent UTI in 252 postmenopausal women. TMP/SMX and lactobacilli therapies did not differ significantly in preventing recurrent UTIs over 1 year. However, after 1 month of TMP/SMX prophylaxis, resistance to TMP/SMX, TMP, and amoxicillin had increased from 20%-40% to 80%-95% among Escherichia coli from the feces and urine of asymptomatic women and among E. coli causing a UTI. Resistance did not increase during lactobacilli prophylaxis. In other studies, TMP/SMX was found less effective for chronic suppression when compared with oral D-mannose or Uromune, a sublingual therapeutic vaccine available in Spain.9,10

• Glycosaminoglycan (GAG)-strengthening properties. Evidence suggests that a defect in the protective GAG layer of the urothelium contributes to recurrent UTIs.5,7,11 In three separate studies, women receiving intravesical heparin, intravesical HA/CS, or oral HA/CS plus curcumin and quercetin experienced a decreased number of recurrences over a 6- to 12-month period because of these therapies’ GAG-strengthening properties.5,7,11

• Inhibition of adhesion. In one study, cranberry fruit powder containing high levels of proanthocyanidins (500 mg), as compared with placebo, led to a 58% relative risk 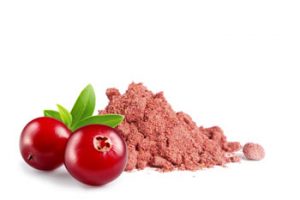 reduction in recurrent UTIs over a 6-month period.16

• Provision of immunity against multiple strains of UTI-causing pathogens. A multicenter observational study showed that the Uromune sublingual vaccine containing an inactivated bacterial cell suspension of selected strains of E. coli, Klebsiella pneumoniae, Proteus vulgaris, and E. faecalis led to a 75% improvement in recurrence rate in the first 3 months and a 77% improvement at the 15-month mark.10 This treatment was significantly superior to TMP/SMX in reducing UTI recurrences.

• Interference with the adherence, growth, and colonization of uropathogenic bacteria. Although the efficacy of oral lactobacilli versus TMP/SMX did not differ significantly in terms of preventing UTI recurrence, as mentioned previously, a decrease in the incidence of antibiotic resistance was demonstrated in lactobacilli users.6

Reasons for selection of nonantibiotic therapies

All of the articles indicated that researchers are investigating other options for suppressive therapy—largely because of concerns about widespread antibiotic resistance. Heterogeneous, uropathogenic E. coli strains are the cause of more than 80% of uncomplicated UTIs,17 and resistance of E. coli to antibiotics is increasing.7 In fact, Lorenz-Gomez et al9 reported that in some geographic locations throughout the world, more than 40% of bacterial strains are resistant to antibiotics. In addition, the use of antibiotics to treat recurrent UTIs can lead to secondary infections such as candidiasis and Clostridium difficile infection. Antibiotic resistance and adverse reactions likely contribute to the annual billions of dollars in healthcare costs related to UTIs.5,8,9 Today, traditional suppressive therapy with antibiotics may be both ineffective and costly in many cases.

Beyond concerns about efficacy, patients complain about the side effects associated with long-term antibiotic use, leading them to discontinue treatment. In all of the articles reviewed, no adverse side effects were reported with any of the non-antibiotic prophylactic interventions. Furthermore, many women state a preference for avoiding antibiotic use and actively seek alternative options.6,7

The purpose of this literature review was to explore current evidence regarding effective suppressive therapies to prevent recurrent UTIs in women. Researchers for the eight studies discussed in this article explored the potential of non-antibiotic suppressive therapies, alone or in combination with long-term antibiotic use, for prevention of recurrent UTIs. The scope of studies reviewed was limited to those available in full-text format. However, the articles chosen represent the varied therapies currently in use and/or being studied.

Seven of the studies were conducted in Europe. In fact, European guidelines represent a shift toward using behavioral and non-antibiotic therapies first to prevent UTI recurrence, resorting to antibiotics only when other therapies are not effective.13 However, no standard evidence-based guidelines are available for providing non-antibiotic options for treatment. Long-term low-dose antibiotic use is still considered first-line therapy in the U.S., although this approach is recognized as not as effective as it once was because of growing antibiotic resistance.

Awareness of the efficacy of available options for suppression of UTI recurrence allows HCPs to implement evidence-based care in clinical practice. Choosing non-antibiotic suppressive therapies shown to be effective, as opposed to lowdose antibiotics, as first-line treatment is reasonable, especially with increasing resistance rates. HCPs should discuss all available options with women so that informed treatment decision-making meets individual patient needs and preferences.

Treatment of recurrent UTIs is a challenge. The studies reviewed in this article illustrate an international interest in finding safe, effective, acceptable therapies beyond the use of antibiotics. The data indicate a need for more research. A goal is to have the information needed to develop evidence-based guidelines for prevention of UTI recurrence that allow for individualized care and better outcomes

Christy D. Martin is a DNP student and Jonas Scholar 2018-2020, Nancy Wingo is Assistant Professor, and Aimee Chism Holland is Associate Professor, all at the University of Alabama at Birmingham. The authors state that they do not have a financial interest in or other relationship with any commercial product named in this article.