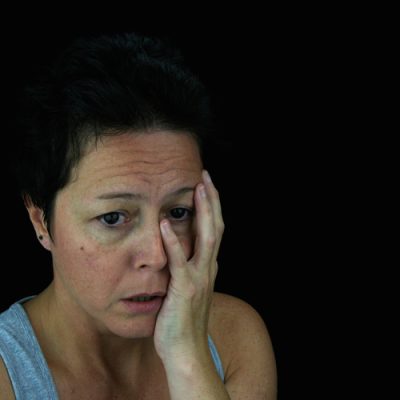 Consider Trauma in Your Menopausal Patients

Psychological trauma has the potential to suppress ovarian function and reduce ovarian estrogen secretion.  However, the relationship between trauma and sex hormones among midlife women is not well understood.  A recent study just presented at the North American Menopause Society (NAMS) annual meeting found that traumatic life experiences were linked with lower levels of estrogens in menopause—particularly in women who got fewer hours of sleep.

The finding “underscores the importance of considering trauma in relation to endogenous estrogens, which have implications for women’s midlife health,” researchers noted.

In the MsBrain study, postmenopausal women who experienced a traumatic event across their lifetime had lower levels of estradiol compared to those who did not (B[SE]=-0.16 [0.08], P=0.04), reported Mary Carson, MS, PhD candidate, of the University of Pittsburgh.

History of a traumatic event was also associated with lower levels of estrone (B[SE]=-0.14 [0.06], P=0.01), but not with follicle-stimulating hormone (FSH; B[SE]=0.05 [0.07], P=0.49), Carson reported.  The association between trauma and lower levels of estradiol was primarily observed in women who got less than 6 hours of sleep per night.

Between 37% and 78% of US women experience a traumatic event at some point in their lifetime, including assault, harassment, or natural disasters, Carson stated.  Stress from such events can have an impact on the hypothalamic-pituitary-gonadal axis, which is responsible for reproductive function.  In fact, she stated, previous research has shown that severe psychological stress may suppress ovarian estrogen secretion.

In their research, Carson and colleagues assessed how the experience of a traumatic event impacted levels of estradiol and estrone in postmenopausal women.  From 2017 to 2021, the researchers evaluated women (ages 45 to 67) who were not taking hormone therapy or selective serotonin reuptake inhibitors (SSRIs).  Additionally, study participants had not undergone bilateral oophorectomy or hysterectomy.

Participants were 260 postmenopausal women (79% white, 17% black, 4% other ethnicity; mean age=59 years) with a mean BMI of 29.  Average estrone levels were 35 pg/mL, and average estradiol levels were 6.2 pg/mL.  Nearly a third of study participants reported getting fewer than 6 hours of sleep/night.  The researchers adjusted for covariates including age, race/ethnicity, BMI, and smoking history.

Well over half had trauma

Overall, 64% of participants reported a lifetime traumatic event, the most common ones being sexual harassment or unwanted sexual contact.

“Findings were not accounted for by depressive and post-traumatic stress disorder symptoms, or vasomotor symptoms,” Carson and colleagues wrote.

Carson said that future research should aim to examine the association between trauma and fluctuation in sex hormones, and that further investigations of FSH and testosterone are needed.

The American College of Obstetricians and Gynecologists makes the following recommendations and conclusions regarding a trauma-informed approach to the health care visit:

Find the full downloadable PDF of the ACOG Committee Opinion, “Caring for Patients Who have Experienced Trauma,” here.