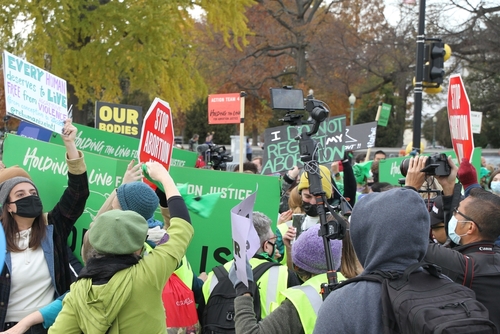 A newly conservative Supreme Court on Wednesday heard the most serious legal challenge in a generation to a woman’s right to obtain an abortion. And judging from the questions asked by the justices, it appeared possible — even likely — that a majority of them could vote to turn the thorny question of whether to allow abortion and under what circumstances back to individual states.

The law under review in Dobbs v. Jackson Women’s Health Organization, passed by Mississippi in 2018, would ban most abortions after 15 weeks of pregnancy. That is a direct contravention of Supreme Court precedents set in 1973’s Roe v. Wade and 1992’s Planned Parenthood of Southeastern Pennsylvania v. Casey, which say states cannot ban abortion until fetal “viability” — generally considered to occur at about 22 to 24 weeks.

In recent years, the high court has been asked to decide not whether states can ban the procedure entirely but whether state regulations prior to viability represent an “undue burden” on a patient seeking an abortion. In 2007, for example, in Gonzales v. Carhart, the court ruled that Congress could ban a specific abortion method, dubbed “partial-birth abortion.” But in 2016, the court also ruled in Whole Woman’s Health v. Hellerstedt that Texas went too far in requiring abortion clinics to meet health standards equivalent to those for outpatient surgical facilities and requiring doctors who perform abortions to hold hospital admitting privileges.

Not since 1992 has the court squarely faced the question of whether to retain Roe and Casey’s central holding: that there is a constitutional right to abortion prior to viability. But in accepting the Mississippi case for argument last spring, the court specifically said it intended to address the question of “whether all pre-viability prohibitions on elective abortion are unconstitutional.”

Mississippi Solicitor General Scott Stewart, however, did not spend his time before the justices trying to persuade the court merely to uphold his state’s ban while leaving the broader right to abortion intact. Rather, he argued for overturning both Roe and Casey. Roe, he said, “is an egregiously wrong decision that has inflicted tremendous wrong on our country and will continue to do so … unless and until this court overrules it.”

One can never really tell what the justices will do from the oral arguments, but Stewart’s comments seemed to gain sympathy from the six conservative justices. “Why should this court be the arbiter rather than Congress, state legislatures and the people,” asked Justice Brett Kavanaugh. “Why is that not the right answer?”

Those on the other side argued back. “For a state to take control of a woman’s body … is a fundamental deprivation of her liberty,” said Julie Rikelman of the Center for Reproductive Rights, the lead attorney for the last remaining abortion clinic in Mississippi.

Rikelman was buttressed by U.S. Solicitor General Elizabeth Prelogar, who told the justices that to overturn Roe and Casey “would be an unprecedented contraction of individual rights.”

The conservative justices also trained many questions on the issue of why viability of the fetus is a proper standard for setting a limit on abortions.

Mississippi’s Stewart argued that viability “is not tethered to anything in the Constitution. It’s a quintessentially political line.”

Justice Sonia Sotomayor, however, was quick to respond. “How is your interest anything other than a religious view?” she asked Stewart. “The issue of when life begins has been debated since the beginning of time.”

And Prelogar specifically declined to set a cutoff date for states to ban abortion other than viability. “I don’t think there’s any line that could be more principled than viability,” she told Justice Neil Gorsuch.

Still, court watchers say the mere act of accepting the case suggests that the conservative supermajority of justices intends to overrule or at least change Roe in a major way.

“For the Supreme Court to take this case and presumably uphold the law, the justices will either have to say Mississippi is within its rights to do this because there’s no right to choose abortion at all or because viability as a dividing line doesn’t make sense,” said Mary Ziegler, a Florida State University law professor, in the Nov. 23 episode of KHN’s “What the Health?” podcast. “So that means, in essence, the court is either going to have to overrule Roe entirely or transform what Roe means in order to side with Mississippi. And either of those things would be a huge deal.”

In fact, should Roe be overturned, more than half the states are likely to ban abortion almost immediately, according to the Guttmacher Institute, an abortion-rights research group. Nine states have bans still on the books from when Roe was decided; a dozen states have “trigger” laws that would ban abortion if Roe falls; and several other states have various other bans that have passed but are not in force due to Roe’s existence.

That’s exactly what anti-abortion forces seem to be hoping for. “Mississippi’s law, if upheld, brings us much closer to where we ought to be,” said Marjorie Dannenfelser, president of the Susan B. Anthony List, which funds anti-abortion candidates for public office. “This is America’s chance to step back from the brink of madness after all these long years. To turn the page on Roe’s onerous chapter and begin a more humane era — one where every child and every mother is safe under the mantle of law.”

The arguments Wednesday came just a month after the court took up arguments in two cases involving a Texas law, known as SB 8, that bans abortion after fetal cardiac activity can be detected, at about six weeks into pregnancy. Those arguments, however, focused not on the question of whether the Texas ban is unconstitutional, but on whether either the abortion providers or the federal government can challenge it in court.

The arguments last month focused on an unusual mechanism designed to prevent federal courts from blocking the law. State officials have no role in ensuring that the ban is obeyed; rather, the law leaves enforcement to the public, by authorizing civil lawsuits against not just anyone who performs an abortion, but anyone who “aids and abets” the performance of an abortion, which could include those who drive patients to an abortion clinic or counsel them. People who bring those suits and win would be guaranteed damages of at least $10,000.

A decision in the Mississippi case is not expected until summer. The Texas decision, however, could come anytime because the law is currently in effect.