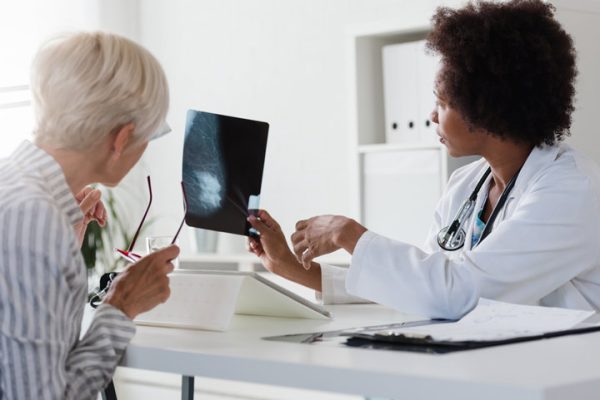 Cardiovascular disease (CVD) remains the #1 cause of death among US women according to the American Heart Association (AHA)’s Heart and Stroke Statistical Update 2022, a risk ranking only ~50% of women are aware of.  In fact, data shows that more women report worrying about their risk for breast cancer than heart disease.  But can one screening serve as a significant diagnostic tool for both?

New research reveals that detection of breast arterial calcifications (BAC) on breast mammograms was associated with a higher risk of cardiovascular disease in postmenopausal women.  The study was published March 15 in Circulation: Cardiovascular Imaging, a peer-reviewed journal of the AHA.

BAC is commonly seen in mammograms, the authors state, and is currently not considered a clinically actionable incidental finding.  However, there is mounting evidence that BAC correlates with angiographically defined coronary artery disease and portends increased risk of CVD outcomes.

In the study’s analysis of the health records of 5,059 women, those with BAC present on their mammogram were 51% more likely to develop heart disease or have a stroke compared with women who did not have BAC.  Further, in a 6.5-year follow-up, those women with BAC were 23% more likely to develop any type of CVD, including heart disease, stroke, heart failure, and diseases of the peripheral arteries.

The subjects whose data were analyzed were a subset more than 200,000 women who underwent screening mammograms as part of MINERVA (MultIethNic study of brEast aRterial calcium gradation and cardioVAscular disease), a large, racially, and ethnically diverse cohort of postmenopausal women.  All were between the ages of 60 and 79 years, were actively enrolled in the same health insurance plan, and had received at least one regular screening with digital mammography at 1 of 9 Kaiser Permanente of Northern California facilities between October 24, 2012 and February 13, 2015.  None of the women had any previous history of CVD or breast cancer.

BAC, a buildup of calcium within the middle layer of the breast’s arterial wall, is related to aging, Type 2 diabetes, high blood pressure, and inflammation, and is a marker of stiffening in the arteries.  It is distinct from calcification of the inner layer of the arteries typically found in patients who smoke or those with high cholesterol levels.

BAC is a common finding that appears as white areas in the breast’s arteries on a mammogram and is information which radiologists often include in their mammography reports—but not always.  According to Brown et al (2021), radiologists’ reporting practices and perceptions regarding BAC are not homogeneous.  “Although many radiologists report BAC to varying degrees, it is not routinely reported…Experienced radiologists are more likely to include and value BAC in their breast imaging practice.”

The primary author of Circulation: Cardiovascular Imaging study added the additional diagnostic benefits of BAC would involve no additional cost or extra radiation exposure for women involved as the US Preventive Services Task Force (USPSTF) already recommends that women ages 50 to 74 years undergo a mammogram every 2 years.  For younger women from 40 to 49, USPSTF states that mammography may be considered for the early diagnosis of breast cancer based on individual risks and as advised by a physician.  These screenings, performed within the USPSTF timing guidelines, are covered as a preventive service with no copayment by most health insurance providers including Medicare, Medicaid, and private insurance companies, as required by the Affordable Care Act, he notes.

The authors conclude that additional research is warranted on study populations of women under the age of 60 in order to establish the value of BAC in this younger cohort.  They also add that a longer follow-up period is needed “to better delineate the dose-response association between BAC burden and CVD outcomes.”

Though it is not currently the standard of care for BAC visible on mammograms to be reported, the researchers hope their findings will spur an update of the guidelines for reporting BAC from routine mammograms in the belief that integrating this information in cardiovascular risk calculators can ultimately result in improved cardiovascular risk reduction strategies.  “Our analysis…adds to the body of evidence that assessment and reporting of BAC status has potential utility to change clinical practice and impact primary CVD prevention for women.”

Find the full analysis and an accompanying editorial on the study, “Breast Arterial Calcification: a Novel Cardiovascular Risk Enhancer Among Postmenopausal Women,” at https://www.ahajournals.org/doi/10.1161/CIRCIMAGING.121.013526