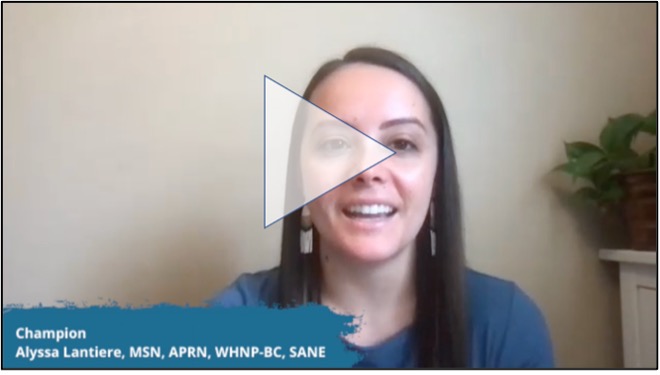 A social media campaign has been launched to celebrate all the Women’s Health Nurse Practitioners, midwives and nurses who do so much to champion the prevention of fetal alcohol spectrum disorders (FASD).

The program has been launched by NPs, Midwives, and Nurses: Partnering to Prevent FASDs, a coalition supported by Nurse Practitioners in Women’s Health along with the American College of Nurse-Midwives, the Association of Women’s Health, Obstetric, and Neonatal Nurses, and the University of Alaska Anchorage Center for Behavioral Health Research and Services.

The campaign includes brief videos of three providers discussing their FASD prevention efforts, including Alyssa Lantiere, MSN, APRN, WHNP-BC, SANE, who was recently certified as a WHNP as a graduate of Duke University’s School of Nursing.

She explains that she has had an awareness of FASD since before becoming an RN after volunteering in South Africa and encountering a child who had an FASD. She recently was hired at a federally qualified health center that works with an underserved population, so she plans to expand knowledge of fetal alcohol awareness not only with her patients and colleagues, but in the community at large.

The three practitioners in the videos are FASD champions who help disseminate science-based information on the health risks associated with, as well as the strategies for preventing, alcohol-exposed pregnancies and FASDs among their colleagues, students, coworkers, and patients.

The goal of the coalition is to raise awareness among, and provide education and training opportunities to, women’s health nurses and midwives about preventing alcohol-exposed pregnancies and FASDs.

This coalition is part of the wider Centers for Disease Control and Prevention (CDC)-supported Collaborative for Alcohol-Free Pregnancy, a group of national partners that includes professional organizations, medical societies, university centers, and a variety of practitioners from six health disciplines working together to prevent FASDs through activities that:

• Promote member awareness of risky alcohol use, including any alcohol use during pregnancy;

• Promote the use of science-based messages and clinical guidelines that support implementation of alcohol screening and brief intervention; and

• Build and expand networks of champions to promote awareness activities and disseminate resources.

All nurses and midwives are encouraged to join the coalition and take advantage of its resources, including education, training, infographics and toolkits.