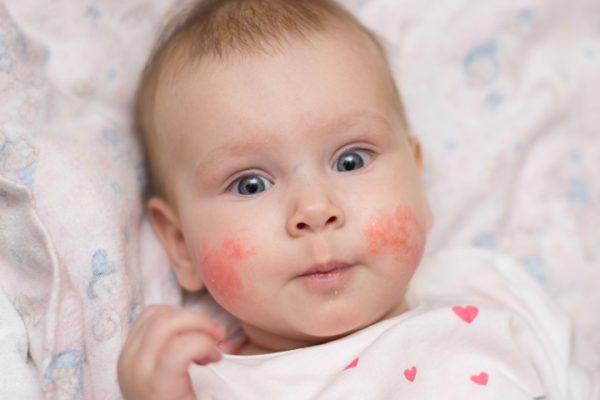 Vitamin D Supplementation in Pregnancy May Reduce Eczema in Babies

How many children suffer?

Atopic dermatitis (also known as eczema) is a common skin condition in babies with the American Academy of Dermatology (AAD) citing that it affects up to 25% of children.  Further, AAD data finds that 60% of people with eczema develop it during their first year of life.

Authors from a 2104 study in the journal Dermatitis sought to determine the distribution and associations of childhood eczema severity in the United States.  After analyzing data from the 2007 National Survey of Children’s Health, a prospective questionnaire-based study of a nationally representative sample of 91,642 children (0-17yr), Silverberg and colleagues found that the prevalence of childhood eczema in the US was nearly 13%.  Of those children, 67% had mild, 26% moderate, and 7% severe disease.

Pregnant women participating in the study took either 1000 IU of cholecalciferol per day or a placebo beginning at approximately 14 weeks’ gestation and continuing until delivery.

Trained research nurses who were blinded to intervention and control allocation utilized a standardized questionnaire and examination in assessing 703 children for eczema at ages 12 months, 24 months, and 48 months using the UK Working Party diagnostic criteria for the definition of atopic eczema.

Early affect, but not fully sustained

The children of mothers who received Vitamin D had a lower odds ratio of atopic eczema at age 12 months, the study found.  However, this effect weakened and was not statistically significant at ages 24 months and 48 months.

Many international and national guidelines recommend cholecalciferol 400–600 IU daily throughout pregnancy, with the strongest evidence for the prevention of neonatal hypocalcemia and emerging evidence for effects on other health outcomes affecting the skeletal, respiratory and immune systems (Harvey et all, 2014).  The authors believe that the current findings from their study inform understanding of the early-life influences on infantile eczema and support recommendations for routine vitamin D supplementation during pregnancy.

“We know that Vitamin D can affect the immune system and the proteins that make up our skin,” lead author Professor Keith Godfrey stated in a University of Southampton press release accompanying publication of the study.  “We were interested to know if Vitamin D supplements taken by pregnant women would have an impact on their child’s risk of atopic eczema.”

The authors contend that their data provide the first randomized controlled trial evidence of a protective effect of antenatal cholecalciferol supplementation on the risk of infantile atopic eczema, with the effect potentially being conveyed via increased breast milk cholecalciferol levels.

“Our findings showed a positive effect, which was more evident in infants that breastfed.  This may reflect supplementation during pregnancy increasing the amount of Vitamin D in breast milk,” Godfrey concluded.

Access Professor Godfrey and colleagues’ paper “Maternal antenatal vitamin D supplementation and offspring risk of atopic eczema in the first 4 years of life: evidence from a randomized controlled trial” via PubMed at https://pubmed.ncbi.nlm.nih.gov/35763390/

ACOG provides its latest Committee Opinion “Vitamin D: Screening and Supplementation During Pregnancy” which reviews clinical guidance and evidence-based recommendations for your patients concerning routine screening and vitamin D supplementation during pregnancy.  It is also available to you on the page as a downloadable PDF.

The America Academy of Dermatology sets out practical advice for navigating eczema for your patients in its Eczema Resource Center with additional links to types and treatments for the skin condition, sections on both childhood and adult eczema, and a featured video “to help manage your baby’s symptoms and decrease flare-ups.”