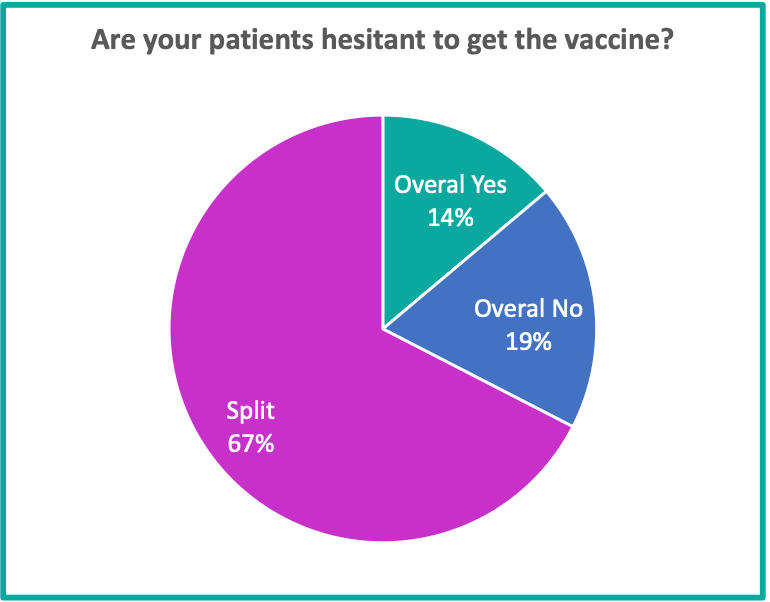 Survey Finds Most NPs Vaccinated; Patients Have Some Hesitancy

A survey of more than 500 Nurse Practitioners found that the vast majority have been vaccinated for Covid-19, while most of them described their patients as split about getting the vaccine themselves.

The survey, conducted in January by Nurse Practitioners in Women’s Health of its members, found that 92 percent of the respondents had been offered the opportunity to be vaccinated and 84 percent had done so.

Of those who had not, around 8 percent said it was due to concerns about safety, efficacy or a decision to simply delay getting vaccinated.

Nearly half of the responding NPs said their biggest concern is for their patients’ access to the Covid-19 vaccines, with 83 percent saying their patients have asked about the vaccine.

Of those patients who are hesitant, 84 percent cite safety concerns, the NPs said. Just over half were concerned about side effects.

The survey, the third NPWH has conducted since March 2020, also shed light on the barriers to care that the pandemic has created in the last year. Nearly 70 percent of providers reported a decrease in well-woman visits and more than 35 percent, a drop in family planning/contraception appointments.

As the NPs’ primary concern has shifted toward the vaccine, their worry over adequate

PPE has lessened, with 59 percent saying they now have adequate PPE compared to 53 percent who responded to an August survey. Only 13 percent are reporting even occasional shortages, compared to 19 percent in the summer.

“This experience has laid bare the weaknesses and problems we have within our healthcare system and local and federal support systems. We have a lot we need to fix,” said one, while another added “So rewarding to vaccinate my community and get a glimmer of hope and feel and hear the gratitude from folks.”