According to the Centers for Disease Control and Prevention (CDC), about 1.2 million persons are living with HIV in the United States, and about 20% of them are unaware of it.1 Lack of awareness of HIV status contributes to viral transmission. Healthcare providers (HCPs) play a vital role in the screening, diagnosis, and treatment of HIV infection, but they can also play an important role in HIV prevention. This article focuses on pre-exposure prophylaxis (PrEP), a safe and effective intervention that is rapidly becoming a major tool in HIV transmission prevention. The article also provides an overview of the assessment and management of patients prior to and during the use of PrEP.

The CDC estimates that 50,000 persons in the United States are newly infected with HIV every year.1 Most of the new cases involve men who have sex with men (MSM) (n = 30,689), but African-American women represent a disproportionate number of new infections (n = 5,300) when compared with white non-Hispanic women (n = 1,300) and Hispanic/Latina women (1,200).2

The birth rate among HIV-infected women has increased from 6,000-7,000 live births in 2000 to 8,700 live births in 2006, the last year reported.3 This increase in births may be related to the increased availability and use of antiretroviral medications, which significantly decrease mother-to-child transmission risk. Other factors are also in play. Study data suggest that women who are HIV positive and desire children, including those who disclose their seropositive status to their partners, may not be using condoms consistently.4,5 Little is known about birth rates in women who are HIV negative, desire children, and are in a relationship with an HIV-positive partner.

Pre exposure prophylaxis is the most recent intervention in the effort to fight the HIV epidemic. PrEP is a combination of two antiretrovirals, tenofovir disoproxil fumarate (TDF) 300 mg and emtricitabine (FTC) 200 mg, taken once daily. This treatment has been shown to reduce transmission risk by upwards of 92%.6 PrEP is available to adult men and women who are HIV negative but have an increased risk of exposure to HIV through sexual and/or injection drug use. PrEP is not approved for use in children or adolescents. Guidelines for PrEP were released in 2014 by the U.S. Public Health Service.<sup.6

Health history
To identify and reduce their patients’ risk for contracting HIV infection, HCPs need to take a sexual history as part of primary care and specialty care services. Studies have shown that many HCPs do not ask about risky sexual behaviors and many patients do not disclose them.4,5,7 Assessment of patients’ sexual behaviors and their potential contribution to HIV risk should be part of every healthcare encounter. The 5 P’s of sexual health—partners, practices, protection from sexually transmitted infections (STIs), past history of STIs, and prevention of pregnancy—provide a framework to assess each patient.8

Many patients are not comfortable talking about their sexual practices, partners, and history. HCPs can facilitate this discussion by informing patients that they routinely take a sexual history so that they can provide appropriate sexual health care, and that all information provided is confidential. HCPs can begin by asking these questions, as recommended in the 2014 PrEP guidelines.6 In the past 6 months:

Next, HCPs need to inquire about any past history of STIs, treatment, past or current symptoms, their partner(s)’ history of STIs, and whether they would like to be tested for HIV during this healthcare encounter. In addition, HCPs can ask patients if they have ever injected drugs not prescribed by their HCP. If the answer is yes, patients are asked whether they have shared injection or drug preparation equipment or been in a drug treatment program in the past 6 months.

Physical examination and lab screening/testing
No specific physical examination is required prior to initiation of PrEP. However, HCPs should recognize and further investigate fever, rash, and cervical adenopathy as potential clinical signs of acute HIV infection. These findings are especially relevant if a patient reports having experienced viral infection symptoms such as fatigue, myalgia, headache, night sweats, and diarrhea in the prior 4 weeks.

Laboratory tests for prospective PrEP recipients include HIV testing, hepatitis B virus (HBV) screening, and renal function tests. HIV testing is done within 1 week of initiating PrEP. If the test result is positive, PrEP is not initiated because it does not provide adequate therapy for HIV; in addition, there is some concern about the development of drug resistance. If the test result is indeterminate, PrEP initiation is postponed until further testing determines HIV status.

Both TDF and FTC suppress replication of HBV as well as HIV, so the PrEP intervention may offer an additional benefit if a patient has active HBV infection. Reactivation of HBV infection may occur if PrEP is discontinued or taken inconsistently. If screening indicates that a patient is not infected by HBV or immune to it, HBV vaccination is recommended. Patients who have significantly reduced renal function should not take PrEP.

Pregnancy testing is done if indicated. Although data regarding the use of TDF/FTC in terms of fetal health and growth are limited, the FDA has approved PrEP use during pregnancy. No evidence exists of harm to fetuses exposed to TDF or FTC when used for treatment of HIV during pregnancy.6

PrEP must be taken on a consistent basis for maximum prevention benefit. PrEP is safe and effective but may cause a loss of appetite, mild gastric upset, or mild headaches initially. HCPs need to counsel patients about these side effects and inform them about over-the-counter drugs that may lessen these effects. Patients are asked to contact their HCP if the side effects do not subside. PrEP reaches maximum intracellular concentrations in about 20 days; therefore, patients should be advised that effectiveness is not immediate.

All other medications that patients are taking should be reviewed. Drug interaction data are available for TDF, but not for FTC. TDF has no significant effect on oral contraceptive hormone levels. Serum concentrations of some drugs (e.g., acyclovir, valacyclovir, aminoglycosides) or of TDF may be increased when these agents are combined.6

Regardless of whether or not a patient decides to take PrEP, HCPs and patients need to discuss other ways to reduce HIV infection risk (e.g., limiting the number of sexual partners, always using a condom). For some individuals, multi-session behavioral counseling may be required. Women who have the potential to become pregnant should receive counseling and provision of contraception if they do not want to become pregnant, and pre-conception counseling if they are considering a pregnancy. Patients who report substance abuse should receive referrals for appropriate treatment.

Patients should receive information on the signs and symptoms of acute HIV infection and should be advised to contact their HCP if these occur. In addition, those patients who are taking PrEP need to know that they should not discontinue the regimen without first discussing it with their HCP.

Patients taking PrEP are seen for follow-up at least every 3 months. At these visits, HCPs need to assess them for side effects, medication adherence, and HIV risk behaviors, as well as for signs and symptoms of acute HIV infection. HIV testing is repeated at each follow-up visit. A pregnancy test is performed for women who could become pregnant, and STI tests are done as indicated. Renal function tests are conducted every 6 months.

These follow-up visits provide an important opportunity to reinforce the need for consistent medication use and to support HIV risk-reduction behaviors. Discussion about continuing PrEP should take into account personal preference, change in risk profile, and ability to adhere to the daily dosing regimen. PrEP must be discontinued if a patient’s HIV test result is positive or if renal function is significantly impaired.

PrEP is a safe and effective pharmacologic intervention for women and men at high risk for HIV infection. HCPs have the opportunity to improve the lives of their patients and provide preventive care in the fight against HIV.

Lorraine Byrnes is Associate Professor at Hunter Bellevue School of Nursing, Hunter College, City University of New York, in New York City. The author states that she does not have a financial interest in or other relationship with any commercial product named in this article. 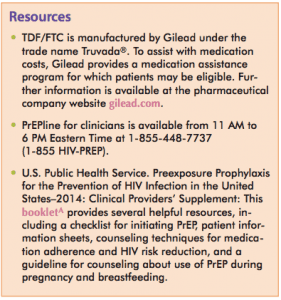 8. Centers for Disease Control and Prevention. A Guide to Taking a Sexual History. cdc.gov/STD/treatment/
SexualHistory.pdf