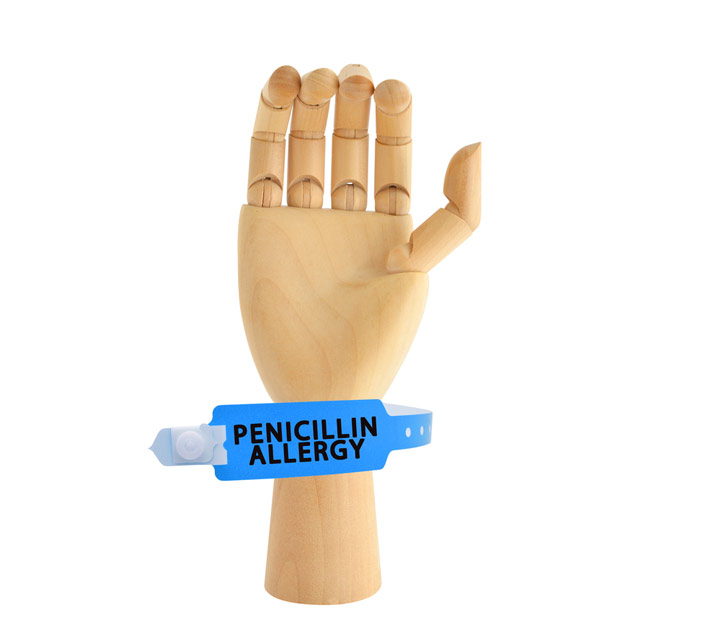 Penicillin allergies are among the most commonly reported allergies throughout the US population, yet research has shown that of patients reporting an allergy to penicillin on their medical histories, only a small percentage are actually allergic to the antibiotic.  There is one patient population in particular who would benefit from knowing whether or not they are truly allergic to penicillin: pregnant women.  Here’s why and how you can help them.

The case for de-labeling a penicillin allergy

Moeun Son, MD, an obstetrician-gynecologist at Yale School of Medicine who specializes in high-risk pregnancy explains that pregnant women often need antibiotics during delivery or at other points during their pregnancy—or postpartum.  “And if a pregnant woman reports a penicillin allergy, providers are nervous about giving her anything that contains it.”

Bacteria that might not be problematic for most people pose different risks for pregnant women.  For example, about 25% of expectant women carry group B strep which can cause an infection in the fetus, Dr. Son continues.  “To prevent transmission, the preference is to give the mother penicillin instead of the broader—or what we sometimes call ‘big-gun’—antibiotics,” she explains.

But administration of that preferred therapeutic isn’t possible if the woman—or the information in her electronic medical record (EMR)—states that she is allergic.  Penicillin goes on the patient’s chart as an allergy, and the issue is never revisited.

Having this penicillin allergy label on the patients’ allergy list when they would otherwise tolerate penicillin has been shown to contribute to longer and more expensive hospital stays, higher risk for adverse reactions from second-line antibiotics, increased antimicrobial resistance and increased rates of Clostridioides difficile infection, states Allison C. Ramsey, MD, chair of the American Academy of Allergy, Asthma & Immunology (AAAAI) Adverse Reactions to Drugs, Biologicals and Latex Committee.  According to the Centers for Disease Control and Prevention, C. difficile is estimated to cause almost half a million infections in the US each year.

In another scenario, people truly may have an allergic reaction to penicillin, but they outgrow it.  About 80% of people outgrow penicillin allergy in 10 years, Dr. Ramsey cites.

Now, a new study by researchers just published in Annals of Allergy, Asthma & Immunology shows that pregnant women who report a penicillin allergy can safely undergo penicillin skin testing and incremental antibiotic drug challenges without adverse effects in their pregnancy.

Beta-lactam antibiotics are first-line treatment for preterm pre-labor rupture of membranes (PROM), chorioamnionitis, and prophylaxis for cesarean deliveries among other conditions in pregnancy, according to the study authors.  Although approximately 10% of the population report a penicillin allergy, they continued, more than 90% of patients with reported penicillin allergy can safely tolerate it after a complete evaluation.

Noting previous studies which demonstrated that pregnant women could undergo penicillin testing successfully, the researchers set out to demonstrate that the skin test for penicillin and the oral challenge for amoxicillin do not result in worse outcomes for mother and child.

The single-center, retrospective electronic chart review involved 136 pregnant women (mean age, 32.5 years; standard deviation, 4.2; 78% white) referred to an outpatient allergy and immunology clinic for penicillin allergy evaluation.  At the clinic, they were assessed for risk using a screening questionnaire through the EMR about their allergy history.

Providers at the clinic then performed skin prick and intradermal testing per standard protocol on 133 of the women.  Penicillin skin testing (PST) was negative for 129 (97%) of them.  Three (2%) of the participants had suboptimal intradermal histamine.  Avoidance was recommended for the one patient with a positive PST.

Next, 133 of the participants took a 2-step or 3-step oral incremental drug challenge (IDC) to amoxicillin or oral penicillin V during the same visit.  All participants passed the IDC, and their penicillin label was removed from their chart.

The researchers then followed 135 of these women during their pregnancy, with 68 (50%) of the patients receiving at least 1 beta-lactam during delivery.  Specifically, 47 (35%) were administered penicillin and 34 (25%) cephalosporin.  Of the 68 women, 67 (97%) tolerated the antibiotic treatment without reactions.

The patient manifesting a reaction experienced immediate nausea and itching after receiving penicillin V with no documented changes in vital signs or observed rash or angioedema.  After successful treatment with diphenhydramine and ondansetron, a penicillin label was added back to her chart.

During the postpartum period, 21 (15%) of the participants who had been evaluated for penicillin allergy received antibiotics, and 14 of them (10%) were administered beta-lactams.  There were no adverse drug reactions reported.

In addition, the researchers reported that there were no differences in neonatal birth weight (3,185 g vs. 3,174 g) or risks for cesarean section (OR = 1.3; 95% CI, 0.88-1.96).  Further, they found no association between evaluation and preterm labor, gestational hypertension, preeclampsia, eclampsia, placental abruption, or PROM, nor were there any differences in the risk for having a pregnancy complication between the groups (OR = 1.4; 95% CI, 0.84-2.36).

The researchers concluded that pregnant women could be safely evaluated for penicillin allergy via PST and oral IDC and potentially see their penicillin allergy label removed, enabling them to benefit from the administration of these antibiotics without increased risk for adverse pregnancy outcomes.

The study authors advise clinicians that, when pregnant patients have a penicillin or amoxicillin allergy on their record, they should discuss the importance of having this label addressed and should refer patients to a specialist—usually an allergist.  The allergist can then perform testing with the required expertise in a safe environment where the patient can be monitored for a reaction.

However, they also noted that providers first need to take a good history of their patients to ensure that they are at very low risk for having a severe hypersensitivity reaction before undergoing testing.