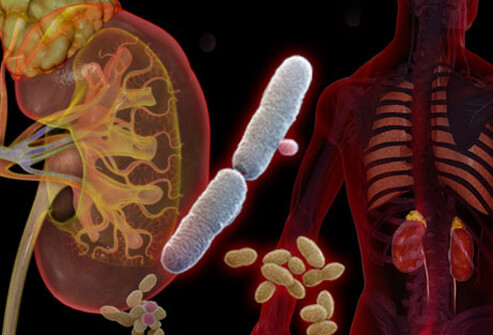 Urinary tract infections (UTIs) can be tricky in older age. They’re not always as easy to spot or treat as in youth. And the decades-long approach to treatment is changing. “We’ve been hasty in using antibiotics, and we’re learning there are significant consequences that can range from side effects of medication to infections with antibiotic-resistant bacteria,” says Dr. Helen Chen, a geriatrician at Harvard-affiliated Hebrew Rehabilitation Center.

UTIs can occur anywhere in the urinary tract. The most common places are the bladder (where urine is stored) and the urethra (the tube through which you urinate). Less common, but more serious, is infection of the kidneys, which filter waste and extra water from the blood and make urine. Infections may be triggered by sexual activity, catheters, kidney stones, decreased estrogen in the lining of the vagina, or urine that’s pooled in the bladder.
Classic symptoms include a burning feeling with urination, a sense of urgency to urinate, increased frequency of urination, blood in the urine, and fever. Some older adults with a UTI also develop confusion.

Some of these UTI symptoms are similar to the symptoms of other conditions common in older people. “That makes it hard to decide if you have a new infection, or if an existing problem is worse, or if you have something else,” says Dr. Chen. For example:

Also complicating diagnosis is UTI testing. A urine sample checks for the presence of bacteria and white blood cells (which would suggest an infection). If this initial test is positive, it’s usually necessary to grow the bacteria in a lab to identify the specific type of bacteria. But older women can carry bacteria in their bladders without any symptoms. Doctors call this asymptomatic bacteruria rather than a bladder infection.

Treating a UTI without classic symptoms, based instead on the presence of some bacteria and white blood cells in urine, may have several consequences. It may mean that an underlying condition (or a worsening condition) is not being addressed. And since treatment involves a course of antibiotics, unnecessary treatment may lead to antibiotic resistance.
While the risk of not giving an antibiotic to rid the bladder of bacteria is small, it can sometimes allow bacteria to spread to the kidney and then to the bloodstream. This can lead to sepsis, the body’s toxic and sometimes deadly response to infection.

“Anyone with new classic symptoms should probably be treated for a UTI. However, if the only symptom is confusion, considering other causes or waiting a day or two to see if it resolves may be appropriate, if the family can observe the person and is okay with this,” says Dr. Chen.
If your doctor does prescribe an antibiotic, talk about potential side effects. Certain commonly used antibiotics called fluoroquinolones — such as levofloxacin (Levaquin) and ciprofloxacin (Cipro) — can be associated with damage to tendons, joints, nerves, and the central nervous system. The FDA advises that these medications should not be used as a first-line treatment for uncomplicated UTIs. Dr. Chen says other antibiotics, such as amoxicillin and clavulanic acid (Augmentin), cotrimoxazole (Bactrim), or nitrofurantoin (Macrobid), may be better options.
via Harvard Health Publications