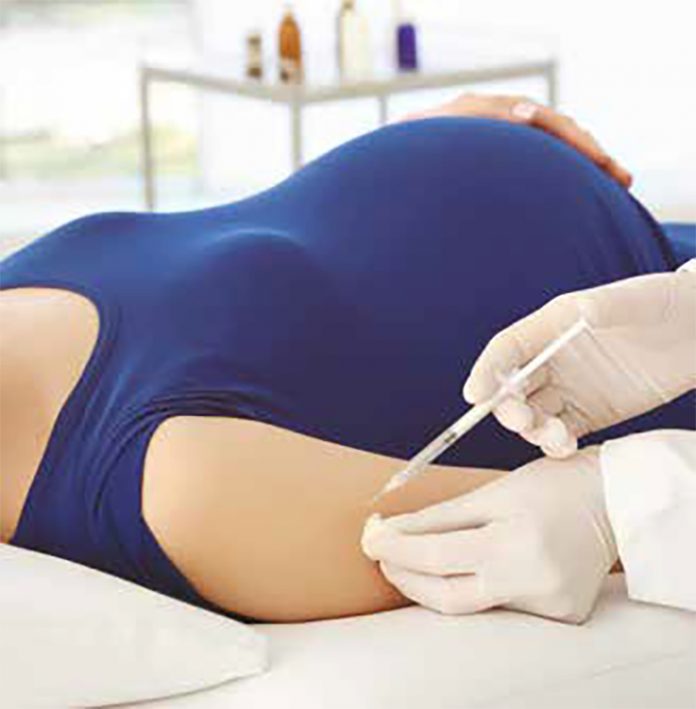 The highly contagious respiratory infection pertussis remains a public health problem for the United States.1 Infants have the highest morbidity and mortality rates from pertussis because of a lack of immunity at birth and an immature immune system. In 2015, a total of 20,762 cases of pertussis were reported in the U.S., with infants accounting for 1,960 cases (9.5% of the total cases).2

In 2013, the CDC and the American Congress of Obstetricians and Gynecologists recommended that pregnant women receive the tetanus/diphtheria/acellular pertussis (Tdap) vaccination at 27-36 weeks’ gestation during each pregnancy.1 Tdap vaccine given to women at this point in pregnancy provides passive immunity to infants until 6 months of age, by which time most will have completed the recommended three-dose vaccination series.3 Despite this evidence-based recommendation, the rate of gestational Tdap vaccination remains low.3 According to obstetricians surveyed, a major barrier to recommending the vaccination is lack of patient interest.4 Many pregnant women do not view pertussis as an infection they can acquire and pass to their infants.5 Some women choose not to obtain the Tdap vaccine during pregnancy because of misinformation about vaccine safety.6 Lack of knowledge about the importance of Tdap vaccination during pregnancy and lack of healthcare provider (HCP) recommendation are reasons pregnant women have noted for not receiving the vaccine.7Nitsch-Osuch et al1 reported that 80% of women would be willing to receive the Tdap vaccine if their HCP recommended it.

The purpose of the project was to implement an evidence-based educational intervention to increase knowledge about the importance of Tdap vaccination during pregnancy and provide information about the vaccine’s safety. The goal was to increase Tdap vaccination rates among pregnant women seen for care at two obstetrics settings.

The university’s institutional review board approved the project. Criteria to participate in the project included being pregnant, having the ability to speak English or Spanish, and being 19-44 years old. The educational intervention included the CDC’s Tdap vaccination handout, a 5-minute educational video created by the project directors (PDs), and a PD-led patient education session. Each educational intervention was available in English and Spanish. Information provided in the handout, video, and education session was identical and included the purpose, importance, and safety of Tdap vaccination during pregnancy and current recommendations in this regard.

The PDs conducted education at their respective practice locations (Clinic A and Clinic B) during a 12-week period. All three educational interventions were implemented with each participant. Education took place at the first obstetric visit or at the 1-hour glucose-tolerance test appointment. Review of the CDC handout, viewing of the video, and the education session took approximately 10 minutes altogether.

Each participant received an evaluation form to complete after watching the video. Completion of this form, which addressed participants’ understanding of the video and its impact on their vaccination decision, was optional. The form was completed by all participants in Clinic A but by only 38% of those in Clinic B, mainly because of time constraints and literacy barriers. If participants chose not to obtain the Tdap vaccine, the PDs asked in a non-judgmental manner about factors that affected their decision.

A total of 75 pregnant women participated in the educational intervention in Clinic A or Clinic B. Each participant’s chart included documentation of the decision to obtain or decline the Tdap vaccination on the problem list and the medication list.

Because Clinic A’s population comprised patients with private insurance or Medicaid, the clinic was able to receive reimbursement for vaccinations. Prior to this intervention, Clinic A provided education, albeit not consistently, in the form of handouts and HCP conversation. A retrospective chart audit showed that among 468 pregnant women seen in the clinic, 186 (40%) received the Tdap vaccination in the year before the intervention. 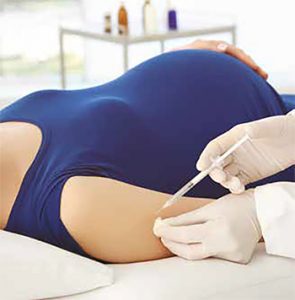 Thirty-one women in Clinic A participated in the Tdap educational intervention. Of these women, 28 (90%) received the vaccine. Of the 3 who refused the vaccine, 2 stated that they did not feel that pertussis was a threat and 1 was concerned about vaccine safety. Data from the Clinic A participants’ completed evaluation forms indicated that HCP conversations superseded the need for an educational video about the importance of Tdap vaccination during pregnancy.

Clinic B’s population was composed of mainly underserved Hispanic women without health insurance. Clinic staff did not routinely administer vaccines because of cost, nor did they provide any education on Tdap vaccination to pregnant women prior to this project. No Tdap vaccinations were given in the year before the intervention. The authors received a grant from the CDC, which provided vaccines for Clinic B. Prior to the grant, patients at this clinic needed to go to the local health department or primary care clinic to obtain the vaccine.

Forty-four women in Clinic B participated in the Tdap educational intervention. Of this group, 33 (75%) received the vaccine. Eleven participants did not receive the vaccine because they believed that everything would be fine. Data from these participants’ completed evaluation forms indicated two factors affecting vaccination rates in a culturally diverse population: (1) The participants understood more clearly the importance of the Tdap vaccination after viewing the educational video in their native language and (2) the participants desired family input with regard to the decision for maternal Tdap vaccination. Although the conversations with the HCP were helpful, these participants indicated a greater understanding after watching the video. Family members were allowed to view the video with participants, thereby clarifying any additional concerns.

Understanding specific barriers to and concerns about vaccination within an HCP’s particular patient population is important. Vaccination rates can be improved by having a protocol in place to ensure that education is provided, vaccination recommendation is made, and the vaccine is available in the clinical setting.

Cari McAlister is a nurse practitioner at Anniston OB/GYN in Anniston, Alabama. Ginny Moore Wurttemberg is a Clinical Specialist for Labor and Delivery at Northside Hospital in Atlanta, Georgia. Donna Dunn is Assistant Professor and Tedra Smith is Assistant Professor and Faculty Mentor at the University of Alabama at Birmingham School of Nursing. This project was supported by a grant from the American Association of Colleges for Nursing (AACN) – Academic Partners to Improve Health.