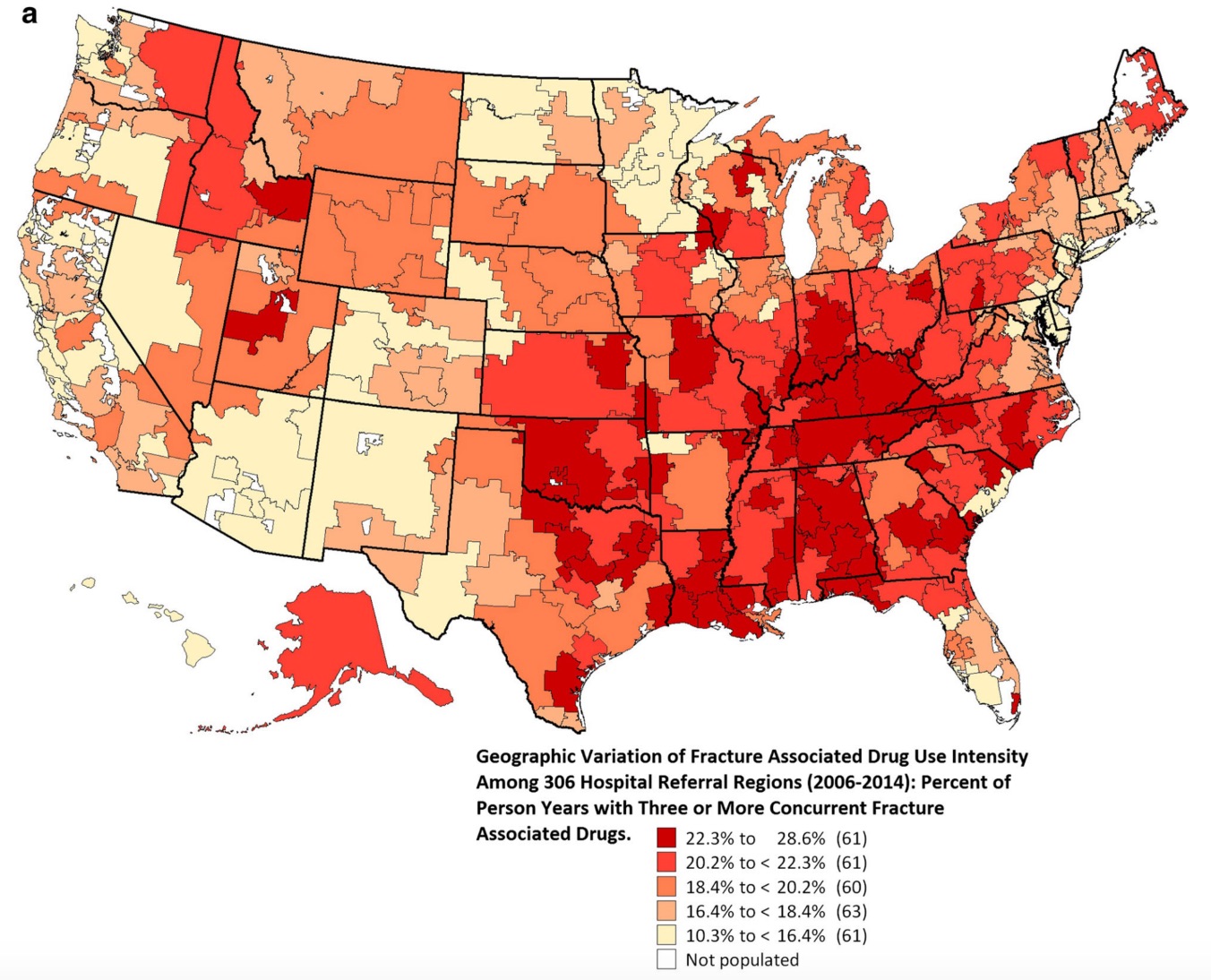 A study that looked at the use of fracture-associated drugs (FAD) in long-term care facilities found that residents in regions of the country with more intense use of the drugs had higher hip fracture rates.

The survey, by Geisel School of Medicine at Dartmouth College, looked at prescribing practices for 21 FAD from more than 400,000 prescription records. It sorted those records by regions and look at more than 36,000 hip fractures from long-care term facilities over an eight-year period.

They found the risk of fractures was 14 percent higher for LTC residents in the highest intensity prescribing areas compared to the lowest areas.

Highest Use in the Southeast

Areas with the greatest multiple FAD use intensity (with at least three FADs prescribed) were in the southeast, in Gulfport and Oxford, Mississippi; Alexandria and Monroe, Louisiana; and Miami, Florida; while the lowest intensity areas were in Bronx, New York; Bend, Oregon; Albuquerque, New Mexico; Honolulu, Hawaii; and Sun City, Arizona.

“Seeing such variation in the intensity of prescribing of these risky drugs across this vulnerable population adds to the evidence that guidelines aren’t necessarily being followed,” says Rebecca Emeny, PhD, MPH, a research scientist at The Dartmouth Institute for Health Policy and Clinical Practice and lead author on the study. “We hope these results contribute to a more considerate weighing of risks and benefits when combinations of these medications are prescribed.”

Benefit vs risk in those over 65

While acknowledging that the use of prescription medications has helped those over 65 better manage disease and improved their quality of life and longevity, there is a potential downside.

Many common drugs—such as opioid pain killers, sleep aids, diuretics, antidepressants, and antacids— create a higher fracture risk by increasing the likelihood of falls or by weakening bones, especially in patients with osteoporosis.

“In our previous research, we showed that combining three or more FADs carried up to a four-fold risk of hip fracture for Medicare beneficiaries, and that exposure to these medications for residents of long-term care facilities was nearly twice that of those living in the community setting,” says Emeny.