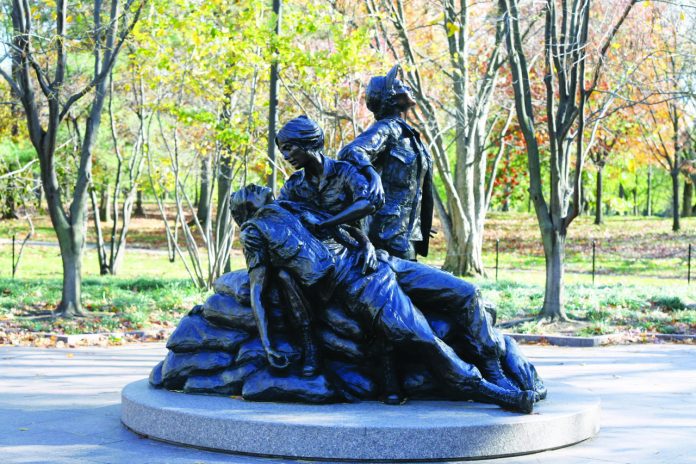 Memorial Day, originally named Decoration Day, is a day of remembrance for those individuals who died in military service for the United States. Initiated after the Civil War on May 30, 1868, the holiday was called Decoration Day because observers honored persons who died in defense of their country by decorating their graves. On the first Decoration Day, 5,000 people placed flowers at the graves of 20,000 Union and Confederate soldiers buried at Arlington National Cemetery. Today, we continue this tradition in our home towns to honor all who served and died for their country. I would like to take this opportunity to recognize the brave nurses who have died during military service—from the founding of our country through all the major wars and military conflicts that have occurred since that time.

To date, more than 100,000 nurses have served their country in war and military conflict zones. The statistical information on these nurses varies somewhat, depending on the source. However, we know that many of these nurses died while providing crucial medical care in these areas.
More than 1,000 nurses, the great majority female, died while serving their country during the Civil War, the Spanish–American War, World War I, World War II, the Korean War, the Vietnam War, the Gulf War in Kuwait, or the war on terror in Iraq and Afghanistan. Many of these nurses, who cared for injured, sick, and/or dying soldiers during these wars, died of communicable diseases such as typhoid, malaria, yellow fever, and influenza. Other nurses lost their lives in aircraft and vehicle accidents in the line of duty. Some nurses, especially in more recent wars, have been victims of enemy fire, suicide bombers, and improvised explosive devices.

Nurses first served in wars such as the Civil War and the Spanish–American War in roles such as volunteer or contract civilian. The founding of the Army Nurses Corps and the Navy Nurses Corps in 1901 and 1908, respectively, enabled women to officially serve in the U.S. military for the first time. But it was not until 1947 that nurses in the Army and Navy corps were granted permanent commissioned officer status. Male registered nurses, regardless of whether they volunteered or were drafted, were generally not assigned as military nurses until the Korean War. Today, not all women serving in the military are nurses, and not all military nurses are women. I would like to pay tribute to all nurses, to all the women and men who have sacrificed their lives in service to our country. The next time you are in our nation’s capital, please take the opportunity to visit memorials specifically dedicated to our military nurses (see photo).

This Memorial Day, please consider observing the National Moment of Silence at 3:00 PM local time. Encourage others to do the same. Pause, reflect, and remember those persons who lost their lives for our freedom. Visit a local or national memorial site. Place flags at the grave markers of soldiers. Hug a military family. Thank a veteran.