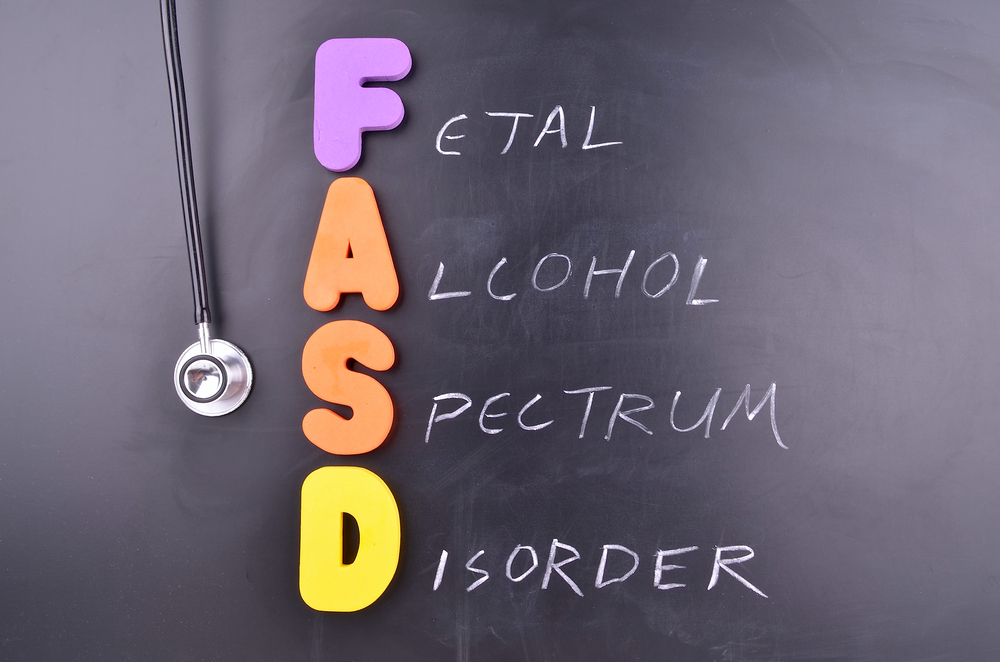 My experience in both women’s health/prenatal care and the field of fetal alcohol spectrum disorders (FASDs) gives me a unique perspective on a group of disorders that are estimated to impact up to 1 in 20 school-age children in the United States.1 I have been a family nurse practitioner and certified nurse midwife since 1981 and 1982, respectively, and know that the rate of unintended pregnancy in this country has not changed significantly over these decades. About half of women still get pregnant when they do not intend to do so despite advances in contraceptive options and healthcare access during this time period. What has changed is the manner in which women consume alcohol. More women drink in a binge pattern (ie, more than 3 standard drinks/occasion), and societal and marketing messages permeate our lives.2 Today, it can feel wrong to not have alcohol as part of many occasions. As a result of these two factors, women today may be “living their lives” and have an increased risk of prenatal alcohol exposure. 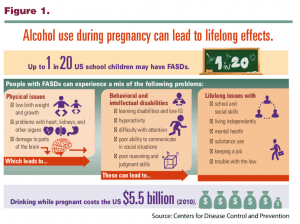 Most health professionals have heard about fetal alcohol syndrome (FAS), which is the most involved but least common condition along the spectrum. Children with FAS have specific facial dysmorphology, impaired growth, and evidence of central nervous system dysfunction.3 Research in animal models has determined that the facial features are impacted in the 3rd to 4th week of gestation. Therefore, if alcohol consumption did not happen during that time period, the facial features will not be present.4 In contrast, the fetal brain is vulnerable to the influence of alcohol, a much-studied teratogen, the entire 9 months. For these reasons, FASDs are largely a “hidden disability” with manifestations that can include developmental delays and/or attention, behavior, learning, and social difficulties. Of great concern is that individuals who fall along the more impacted end of the disability spectrum may struggle to acquire the skills for successful independence in adulthood. Figure 1 depicts the mix of physical issues, behavioral and intellectual disabilities, and lifelong effects that individuals with FASDs can experience.

Individuals with FASDs are often misdiagnosed and/or have many diagnoses that describe their symptoms, but the underlying etiology is not considered.1,5 This is because the alcohol story is often not captured in a prenatal record and/or then transferred into a newborn record for future differential diagnosis. Universal alcohol screening with a standardized tool like the USAUDIT and brief intervention can help healthcare providers (HCPs) to inform their patients about excessive and at-risk patterns of drinking and the potential risk for a pregnancy exposed to alcohol. Depending on the regulatory environment in their state, HCPs can help also to normalize documentation of prenatal alcohol exposure in prenatal problem lists using appropriate ICD-10 codes. (See “Clinical resources: Nurses and midwives: partnering to prevent FASDs,” pp 25-27, for alcohol screening and diagnostic code resources.)

Misdiagnosis matters because treatments may need to be altered to be effective for an individual who has a brain that was built differently.5 If an individual with an FASD does not receive early intervention and appropriate services, they are more at risk for a number of secondary conditions including mental health difficulties (eg, anxiety, depression), disrupted academic or vocational achievement, legal involvement, substance abuse, inappropriate sexual behaviors, and problems with parenting as well as independent living.

A multidisciplinary or neuropsychological evaluation can be the beginning of helping an individual with brain-based differences to understand themselves and get the supports they need in life. The following profiles are of women whose lives have been affected by FASDs, and these represent the wide range of stories about FASDs. Each woman gave permission to share her story. 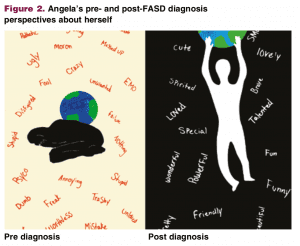 Fifteen-year-old Angela recognized that she might be impacted when her child development class talked about FASDs. She had been in care away from her birth family since age 3 and had experienced anxiety, depression, and appetite regulation symptoms for years. She knew her story included exposure to substances but was uncertain about alcohol. After reaching out to her birth parents, she received confirmation that, yes, alcohol was part of her prenatal story. Their story is a common one, as her birth parents were partying a lot before her mom realized she was pregnant at 6 weeks. Angela’s mom stopped drinking and using cocaine during the remainder of the pregnancy, but she was unable to stop the opiates. An evaluation for FASDs helped Angela to understand her strengths and the brain-based neural pathway disconnects that were interfering with her ability to do some things as easily as she wished. As a result of this new understanding, Angela experienced the “weight of the world” lifting from her. Figure 2 depicts Angela’s pre- and postdiagnosis perspectives about herself. In short, understanding her brain-based differences has helped her to feel more empowered to self-advocate in school, home, and community settings and she is becoming a role model for other teens who experience FASDs.

Gina is a 53-year-old adult who recently received a diagnosis of partial FAS, one of the conditions on the FASD spectrum. Prior to this diagnosis, she attended a community presentation about FASDs where she had an “aha” moment that led to her seeking answers for her long-term challenges. She is married, has two children, is parenting successfully, and runs two businesses, but life has not been without its challenges. Her mother had an alcohol use disorder (AUD), and this resulted in Gina leaving home at age 16 years. She experienced substance use as a teen, multiple (some abusive) marriages, being taken advantage of during financial transactions with her business, and years of depression. She blamed herself for her limitations. As a result of her diagnosis, she is now better able to understand and accept herself for things she cannot do. She reports that her body has always responded very differently to hormonal contraceptives and is now moving through menopause without hormones. She has found it helpful to understand that her brain-based differences and hormonal changes both contribute to emotional lability. She recognizes that she needs her home/life to be very organized and structured, and understands that there will be good brain/bad brain days. She wants to support others who have FASDs.

Laurie is a birth mom who has been in recovery for 11 years. She had the courage to bring her daughter through the FASD diagnostic process because she was seeing her struggle with some school subjects, social interactions, and behaviors. Laurie came from a typical middle-class family but reports that her father had an AUD. Her story of alcohol misuse began with teen experimentation, then partner influences, and she reports having been a “functional alcoholic until I wasn’t.” Her life spiraled into one of vulnerability, homelessness, violence, incarceration, and multiple treatment attempts. She had been pregnant five prior times but had terminated those pregnancies as she had no intention to parent. She consumed alcohol in a high-dose pattern with 5 to 10 drinks each day during the first 15 weeks of this pregnancy. When she made the decision with her husband to keep this baby, she was able to completely stop drinking. She is frustrated with healthcare providers and education personnel who do not know about or understand FASDs.  She reports that “Even when I report binge drinking during the early part of the pregnancy, alcohol is never viewed as the cause of the behaviors. Typically, professionals want to blame my parenting style or explain that my daughter will grow out of it. It’s hard enough to come forward with the alcohol information, which I do to promote her best interest. To not be heard is maddening.” Laurie knows her daughter needs supports to succeed and is a fierce advocate for those services.

All three of these women are “champions” of FASD prevention, support, and intervention. Those most touched by this life-long disability are truly the ones whose stories we need to use to make our key points in a powerful way.6 The National Organization on Fetal Alcohol Syndrome is an organization that can help identify such champions in various communities.

Potential signs and symptoms of FASDs in adolescent/adult patients

The signs and symptoms of FASDs may not be readily apparent during one visit.7 An HCP, however, may begin to recognize a behavior pattern indicating the possibility of an FASD over several visits.

• Reports understanding when given instructions but then does the opposite of what’s been described (possible receptive language issue: not getting entire message, especially if HCP uses too many words and no visual cues)

• Is easily distracted during the visit/exam (possible sensory system issue: ask if things in the environment are bothering them or interfering with being able to focus on the conversation or what you are doing)

• Repeats the same mistakes (problem with long-term retention of learning, not understanding cause/consequences, or is not able to transfer learning from the clinic setting to their home)

• Immaturity (acts younger and more vulnerable than their age)

Strategies to help individuals with brain-based disabilities like FASDs

Among the strategies that can be used to help those with brain-based disabilities like FASD are first to use “external brain” cues to help their memory. These include setting phone calendar reminders for medication use and appointments, and providing reminder calls for appointments and scheduling rides. It is also very useful to break any information provided into smaller chunks and to use visual cues to help them take in the information. If contraception is desired, consider the advantages of using a long-acting reversible contraception method, which may be easier to use if she has memory dysfunction. Finally, consider having a conversation with her about possible prenatal alcohol exposure and whether she would like to be evaluated.8

The ultimate goal for HCPs who see reproductive-aged women is to prevent alcohol use during pregnancy. The main message to share is that there is no known safe amount, no safe time, and no safe type of alcohol use during pregnancy. Another important mission is to help patients of all ages who may have brain-based differences as a result of prenatal alcohol exposure to get the help they need to understand themselves and to build on their strengths to successfully manage a life-long disability.

Note: Please be sure to explore the clinical resources department article “Nurses and midwives: partnering to prevent FASDs” in this issue of Women’s Healthcare for HCP and patient education resources and materials. 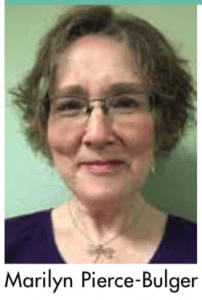 Marilyn Pierce-Bulger is Board Interim President of the Alaska Center for Fetal Alcohol Spectrum Disorders in Anchorage. She is a consultant to the Centers for Disease Control and Prevention-funded Collaborative for Alcohol-Free Pregnancy. The author states that she does not have a financial interest in or other relationship with any commercial product named in this article.