Cervical cancer remains a serious threat to women’s health even as advances in screening technology result in earlier detection and more effective treatment. In a recent survey, we examined attitudes, preferences, and clinical practices related to cervical cancer screening among healthcare providers (HCPs), including nurse practitioners (NPs), obstetrician-gynecologists, and primary care physicians. This research builds on a survey conducted 5 years ago, providing an opportunity to assess the current state and identify changes over time. We examined the views of patients whose voices help inform how we practice healthcare. Strong support was found for the Pap test for women age 21 to 29 years and cotesting (Pap test and human papillomavirus test) for women age 30 to 65 years as most HCPs, including NPs, used the more effective cotesting strategy to screen for cervical cancer in their patients. Differences were seen in preferred frequency of screening and clinical practice of NPs by specialty and clinical setting. NPs differed in some perceptions and clinical practice compared to other HCPs. Although patients agreed with HCPs about the value of the Pap test, they preferred more frequent testing than what is recommended according to 2012 consensus guidelines.

Cervical cancer unnecessarily kills thousands of women every year. It is estimated that in 2019 more than 13,000 women in the United States were diagnosed and more than 4,200 women died from cervical cancer.1 Cervical cancer, however, is preventable with regular screening and appropriate follow-up. Testing has improved because the liquid-based cytology Pap test and cotesting with both the Pap test and human papillomavirus (HPV) test have been shown to be  effective in disease detection.2,3 Statistical modeling shows that increasing screening and HPV vaccination could significantly decrease both incidence and mortality due to cervical cancer in the United States.4

How cervical cancer screening is conducted matters. Screening with only an HPV test has been shown to be less effective than cotesting. The largest real-world retrospective study found that 1 out of 5 cases of cervical cancer were missed with HPV screening alone, which is equivalent to 2,400 women whose cervical cancer may not be diagnosed.5 Analyses of nearly 1,000 cases also suggest that Pap tests are more effective in diagnosing invasive lesions than a standalone HPV test.6

Consensus guidelines for US cervical cancer screening issued in 2012 by the American Society for Colposcopy and Cervical Pathology, American Society for Clinical Pathology, and American Cancer Society recommend cotesting every 5 years for women age 30 to 65 years and cytologic testing alone for women age 21 to 29 years. The American College of Obstetricians and Gynecologists issued these same recommendations in October 2016 and reaffirmed their stance in 2018. Yet, research has shown uneven implementation of these guidelines among healthcare providers (HCPs).7 As well, patients may prefer deviation from these guidelines.8

Building on our previous research in 2015, the National Association of Nurse Practitioners in Women’s Health and HealthyWomen were interested in exploring any changes in attitudes, preferences, and clinical practices of HCPs, including nurse practitioners (NPs), to guide recommendations on ways that women’s healthcare can be improved within the realm of cervical cancer screening. We also considered the voice of female patients to help inform about how best to provide their healthcare.

In December 2019, 751 HCPs were surveyed: 250 nurse practitioners (NPs), 251 obstetrician-gynecologists (ob/gyns), and 250 primary care physicians (PCPs) based on self-report of their medical specialization. Among NPs, 53 (21%) were women’s health NPs (WHNPs), 145 (58%) were family NPs (FNPs), and 52 (21%) were in other specialties such as pediatrics, adult medicine, and gerontology. HCP respondents were recruited online from healthcare panels maintained by M3, a healthcare industry research firm compliant with national and international healthcare research standards.9 In addition, a nationally representative sample of 1,000 women age 25 to 65 years was surveyed online. Respondents were recruited from online panels maintained by Lucid, a consumer market research firm. All respondents were recruited anonymously, and no personally identifiable information was collected during recruitment or the survey itself.

To identify potential differences among subsets of HCPs, comparisons were made among the HCP categories. Additionally, for NPs some comparisons were made in relationship to NP specialty (family practice, women’s health, other) and NP practice type (solo, group/hospital, community clinic). Finally, attitudes of HCPs were compared with those of patients 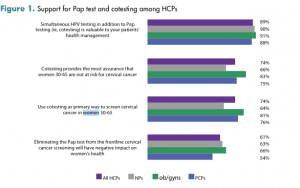 Support for the Pap test and cotesting among HCPs 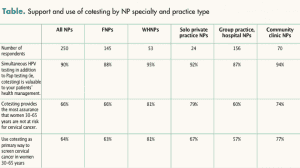 Among HCPs, there was no consensus on how frequently they preferred patients age 30 to 65 years to receive Pap testing and cotesting for cervical cancer screening. Among HCPs overall, 30% preferred patients to receive the Pap test annually and 29% preferred the guideline recommended every 3 years. Regarding cotesting frequency, 34% of HCPs agreed with the guidelines of every 5 years, but 25% reported preferring the frequency of every 3 years. Figure 2 and Figure 3 summarize the results on preferred frequency and show differences among HCP types.

Varying adherence and implementation of consensus guidelines by HCPs

Varying preferences for frequency of cervical cancer testing may be due to uneven familiarity and support for the consensus screening guidelines. Most HCPs in this survey (69%) were familiar with the guidelines, although this varied from a low of 58% of PCPs to a high of 87% of ob/gyns. A little over one half (55%) of HCPs believed the guidelines have had a positive effect on women’s health. Although most HCPs (57%) indicated they discuss with patients that the guidelines do not recommend annual testing, 30% of HCPs preferred that their patients be screened annually with the Pap test. When asked if they supported the guideline recommendation that cotesting should only be done every 5 years for women age 30 to 65 years, the majority of HCPs indicated that they did not. 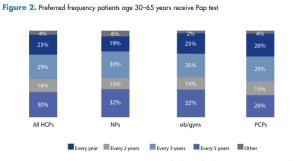 Different attitudes about screening guidelines between HCPs and patients

Just as there were differences in attitudes among different types and specialties of HCPs about screening guidelines, differences existed between HCPs and patients. Significantly more women were familiar with the Pap test (84%) than the HPV test (39%). Like HCPs, 9 in 10 women who were surveyed believed the Pap test is important to managing their overall health and well-being. Patients also agreed with HCPs that eliminating the Pap test would have negative effects on women’s health (61% of HCPs and 68% of women).

Patients were less likely, however, to recall discussing the relationship between HPV and cervical cancer during their visits than were HCPs. Although 95% of HCPs reported discussing cervical cancer and HPV during annual visits, only 48% of women reported that it was discussed during their wellness exams. Further, women had negative perceptions about HPV, as 62% believed there is a stigma associated with a positive HPV diagnosis.

Divergences were also found in HCP preferences and recommendations about the frequency of testing and patient preferences. Although 57% of HCPs reported discussing with patients that the guidelines do not recommend annual testing in most cases, 55% of women still preferred receiving the Pap test once a year. Patients had misgivings about the consensus guidelines recommending a Pap test every 3 years or cotesting every 5 years. If their HCP recommended only receiving a Pap test every 3 years, 43% of women reported that they would be concerned. 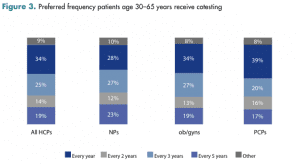 The survey results showed strong support among HCPs for the Pap test and cotesting in screening for cervical cancer, and this support is increasing. Agreement among all HCPs that the information provided by the Pap test used is valuable increased 6 percentage points from 2015. Additionally, in this survey, 9 in 10 NPs considered cotesting valuable for cervical cancer screening, an increase of 2 percentage points from 2015. Of NPs, 64% primarily used cotesting for screening patients age 30 to 65 years, up from 60% in 2015. Patients also strongly supported the Pap test, and 90% rated it as important to managing their health. HCPs expressed a strong preference for continuing to use Pap testing and cotesting to assess cervical cancer risk. This preference is in line with the current consensus screening guidelines. The majority of HCPs continue to screen for cervical cancer (Pap testing or cotesting) more frequently than recommended, however, suggesting possible discomfort with extended screening intervals even while they support the recommended screening methods. Any future changes to guidelines should consider the perspectives of HCPs and their strong support for Pap testing and cotesting in screening for cervical cancer. There is also need for improved education and socialization of any future changes among HCPs and patients.

Differences in attitudes and clinical screening practice were found across HCPs. Among NPs, attitudes and practices differed by specialty and practice settings. More research is needed to identify drivers of different attitudes and practices, as well as ramifications on patient health based on receiving varied medical guidance. We also found differences in attitudes, especially desired frequency of screening, between HCPs and patients. Patients were more likely to prefer annual testing and were more concerned that the consensus guidelines recommend less frequent testing. More research is needed to understand why patients prefer more testing than HCPs, the root cause of lack of understanding about consensus guidelines, and how divergences of preferences may result in suboptimum clinical behaviors and outcomes.

The main limitation of this study is that findings are based on self-reporting of clinical behavior and not actual records of clinical practice or healthcare usage. Research on anonymized insurance reports could help validate actual HCP screening practices and patient acceptance of screening guidelines. In addition, public health research should explore the extent to which socioeconomic disparities affect screening practices. Moreover, research is needed to determine how HCP screening behavior affects patient health outcomes such as the incidence of cervical cancer detection and survival rate.

DaCarla M. Albright is Associate Professor of Clinical Obstetrics and Gynecology at the University of Pennsylvania Perelman School of Medicine in Philadelphia. Susan Rawlins is Director of Professional Development at the National Association of Nurse Practitioners in Women’s Health in Washington, DC. Joshua S. Wu is Research Director at Edelman Intelligence in Rochester, New York. The authors state that they do not have a financial interest in or other relationship with any commercial product named in this article.

Austin RM, Onisko A, Zhao C. Enhanced detection of cervical cancer and precancer through use of imaged liquid-based cytology in routine cytology and HPV cotesting. Am J Clin Pathol. 2018;150(5):385-392.

Assessment and management of vaginal bleeding in early pregnancy